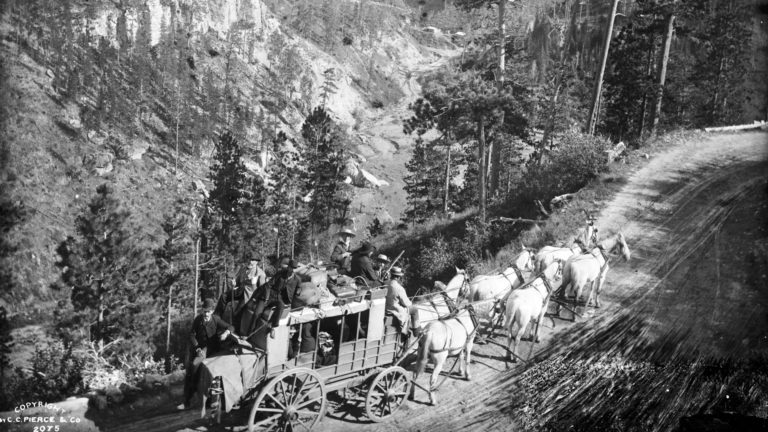 Commemorating the Trails to Deadwood

After the Black Hills gold discovery in 1874, prospectors, businessmen, gamblers, prostitutes, and settlers began to “head for the hills” by the thousands. Other than walking the 200 plus miles, there were three options for freight and passengers: the trails to Deadwood from Cheyenne (Wyoming Territory), Sidney (Nebraska), and Bismarck and Fort Pierre (Dakota Territory).

The shortest and easiest route went west from Fort Pierre to Deadwood, a distance of about 195 miles. Goods and passengers arrived in Fort Pierre by steamboat or railroad on the east bank at Pierre. Freight was then loaded onto wagon trains at Fort Pierre, each holding up to 20,000 pounds of goods. These trains were drawn by teams of up to 20 draft animals, usually oxen. Passengers rode in stagecoaches, and wagons, rode horseback, or walked. An old buffalo trail also used by Indians and fur traders became known as the Fort Pierre to Deadwood Trail.

The arrival of the Fremont, Elkhorn and Missouri Valley Railroad in Buffalo Gap (1885), Rapid City (1886), and into Deadwood (1890), rendered the Cheyenne and Sidney trails obsolete by the late 1880s. Completion of the Chicago and North Western Railway Pierre to Rapid City line in 1907 brought more settlers west of the Missouri River. Fencing of fields and pastures, made transit on the old Deadwood Trail difficult. The Trail was last used by wagons in 1908.

Interest in the trail revived as the 100th anniversary of the closing of the trail approached. Since the trail was such a major force in US, western and South Dakota political and economic history, a recreation of a wagon train transit from Fort Pierre to Deadwood was organized.

The historic transit was sponsored by the Verendrye Museum in Fort Pierre, and organized by a volunteer committee of citizens from across the western part of South Dakota. The non-motorized wagon train transit consisted of a maximum of 300 participants per day, each traveling either on horseback, by stagecoach, various types of wagons, or on foot. (Since ride badges were transferable on a day by day basis, the total number of participants was much larger.) The trip took 17 days, which including 2 rest days.

There was a send-off celebration in Fort Pierre, and a welcoming celebration in Deadwood at the end of the trail. In between, the towns of Hayes, Phillip, Wall and Sturgis held events or celebrations with public participation.