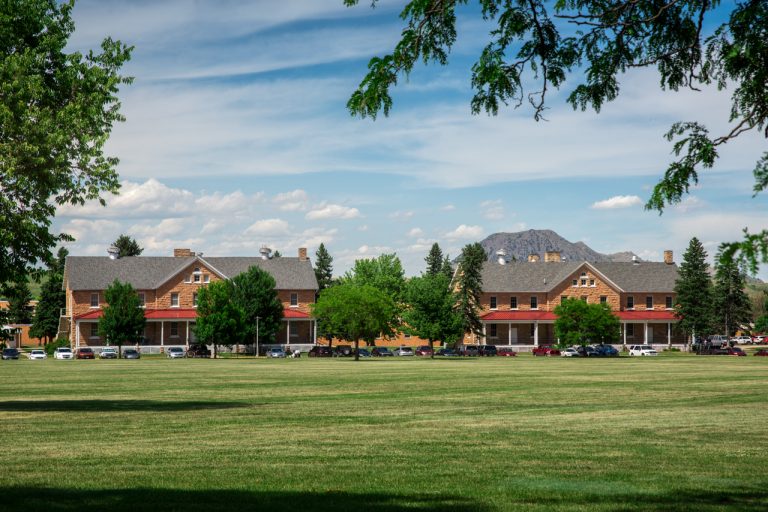 Military Sites in the Black Hills

Whether you’re vacationing in the Black Hills for two weeks or two days, there are plenty of military sites to visit that will appease the history buffs of the family. You might actually have a hard time choosing, especially with highly rated attractions like the Minuteman Missile Site, Fort Meade Museum, and Berlin Wall Memorial nearby.

Whether you want to learn more about South Dakota’s part in our nation’s wars, or simply want to pay respect to local veterans, there are fascinating sites all over the Black Hills — and South Dakota — you can visit.

The Tri-State Museum marks the center of the United States, but also offers an interesting exhibit on military history. The museum displays artifacts and newspapers from the World Wars, including uniforms from the Army, Navy, and Air Force. The exhibit also highlights local veterans, like Donald Smith, a member of the famous Doolittle Raiders; and a guest book for veterans to sign when they visit. Outside, visitors can view the memorial dedicated to veterans of the tri-state area, sponsored by the local VFW chapter.

The South Dakota Air and Space Museum, located just outside of Ellsworth Air Force Base, is open Tuesday through Saturday, 9am to 4pm. The outdoor exhibit features over 30 aircraft, from World War II warbirds to modern day missiles. In addition to military history, the indoor exhibit features stories about aerospace innovation, engineering, and science.

Featuring memorial bricks and commemorative panels, the Custer Veterans Memorial pays tribute to the sacrifices of soldiers across the country. This community-sponsored military site is a peaceful place to visit just on the edge of downtown.

Located outside of the Lawrence County Courthouse, the World War I Memorial honors local soldiers who lost their lives from 1914-1918. A second memorial, erected in 2011, honors all veterans of Lawrence County.

Established after the Civil War, Battle Mountain Sanitarium offered care to Union veterans with lung or respiratory illnesses. The sanitarium also treated soldiers during the Spanish American War, before shifting its focus on tuberculosis treatment during World War I. The facility is now open to visitors.

The Hot Springs National Cemetery is home to the Battle Mountain Monument, a military site situated on the grounds’ highest point. It recognizes those who have lost their lives in defense of this country. The Squire Monument, a memorial honoring Army Chaplain Guy P. Squire, is also located at the cemetery.

Much like Art Alley in downtown Rapid City, the planned Veterans Alley will be an outdoor art installation visitors can enjoy. It’s planned as an artistic military site where visitors can enjoy artwork representing conflicts from World War II to the present. The murals will start on the side of VFW Post 1273 downtown, and wrap around the building to the alley behind. Work is planned to be completed in summer of 2022.

The Fort Meade Museum, located a few miles outside of Sturgis, is open Tuesday through Saturday, May through September. The museum offers an in-depth look at the history of Fort Meade, including its establishment in 1878 and its role as the birthplace of the National Anthem.

Established in 1878, Fort Meade National Cemetery has 188 interments and is currently closed to new interments. Several Buffalo Soldiers and Medal of Honor recipients from the American-Indian Wars are laid to rest at the cemetery.

Other Nearby Military Sites