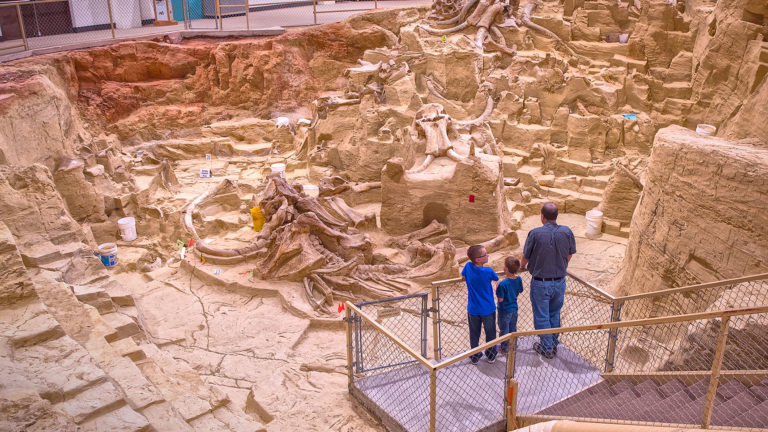 For centuries the bones lay buried until discovered by chance in 1974. While excavating for a housing development, earth-moving equipment exposed one of South Dakota’s greatest treasures. The site was found to contain the largest concentration of Columbian and woolly mammoth bones discovered in the world.

Fortunately, through the work of local citizens, The Mammoth Site was preserved and in 1980 was added to the list of National Natural Landmarks. Today it is a working museum, laboratory and research facility where paleontologists and volunteers excavate and preserve these historic relics.

At least 61 mammoths have been discovered here, along with the remains of a Giant short-faced bear, camel, llama and numerous invertebrates.

After the 10-minute introduction video and a 30-minute guided tour, stroll around the dig area at your own pace. Then, explore the Ice Age Exhibit Hall featuring a working lab, full size replicas of mammoths, short videos on geology and site history.

If you are looking for a different adventure, The Mammoth Site now has The Mammoth Site Excavation and Preservation Program. Visit mammothsite.org or call (605) 745-6017 for more information about these programs.

Copy courtesy of The Mammoth Site