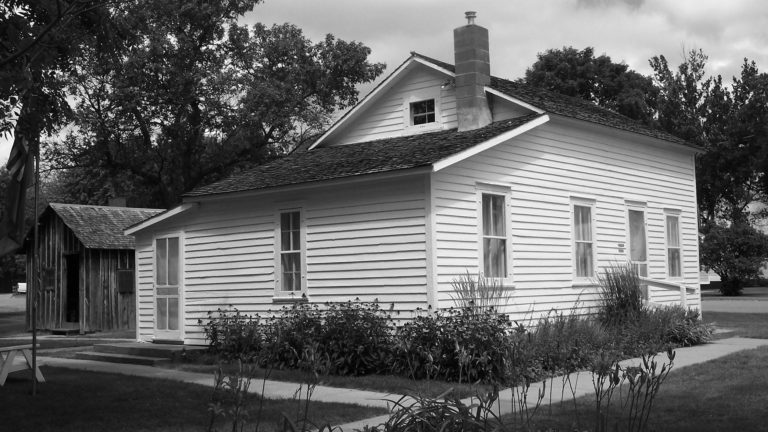 In September of 1974, NBC Television introduced America to the Ingalls family, a pioneer family that had made its way west a century earlier.

The storyline of the 9 seasons and 208 episodes of Little House on the Prairie was loosely taken from the 9 biographical books written by Laura Ingalls Wilder.

Much of the material in five of her titles was based on the family’s life and experiences while living in and near the community of De Smet in eastern South Dakota.

With the encouragement of her daughter Rose in the 1920s, Laura wrote a manuscript entitled Pioneer Girl. The concept of this work, essentially her entire life in a single text, lead to the start of the “Little House” book series. Upon the publication of Little House in the Big Woods by Harper and Brothers (now known as Harper Collins) and its resulting success in 1932, Laura continued to write about her childhood, her family, and her life over the following twenty-five years.

Rose published the last three books after her mother’s death. The books are as follows (date first published):

The “Little House” books have become classics for children and adults alike. Their success and the publicity brought to the stories by the television series would no doubt, have been a source of pride to Laura.

Because of the popular appreciation of the family’s story, many museums and historic sites have been set up in the towns where Laura spent parts of her life. While the South Dakota connection is obvious, there is also a strong link to the Black Hills community of Keystone in the Ingalls story.

Caroline Celestia Ingalls (Carrie) was the third child of Charles and Caroline. After finishing school, she worked for the newspaper in De Smet, and then later moved on to other newspapers in the region as a reporter and typesetter.

Carrie arrived in Keystone in 1911 to work at the town’s newspaper, and it was there that Carrie met local businessman David Swanzey (among the other interesting facts about David is that he is credited with naming nearby Mt. Rushmore). Swanzey (a widower with two young children, Mary and Harold) and Carrie were married on August 1, 1912, in Rapid City. Carrie raised David’s children, and continued to write for the paper.

Sister Mary came to live with Carrie and her family following their mother’s death in 1924, and sister Laura visited Carrie in Keystone at least twice in the 1930s. Carrie died in Keystone in 1946, leaving Laura as the last surviving member of the Ingalls family.

Today, the Keystone Museum, located in the historic Keystone school building where Carrie’s stepchildren attended classes, features some of Carrie’s personal items, memorabilia, and family photos. As a reference, the family necrology follows: