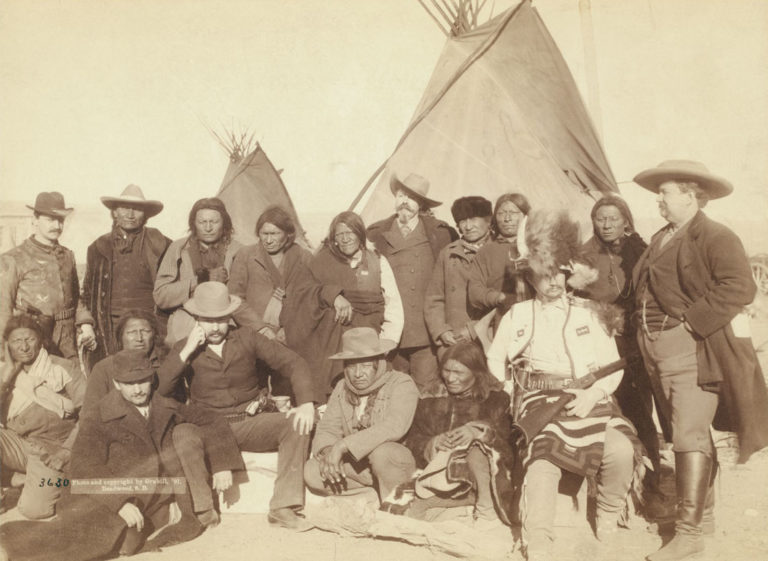 Superficial attempts were made by the U.S. government to get Indians to sign another treaty in 1865, meanwhile moving in more troops to build more forts. The main chiefs, including Red Cloud, would have nothing to do with it. Finally in 1866-1868, Red Cloud led the Sioux and several allied tribes in all-out war against the U.S. military (known as “Red Cloud’s War”) to close the Bozeman Trail that passed through buffalo hunting grounds in the Bighorn Territory (from northeast Wyoming into Montana).

The 1866 Fetterman Massacre was part of this war, where 80 troops were lured out of Fort Phil Kearny to chase a handful of Indians. The Indians, under Red Cloud’s strategy and Crazy Horse’s leadership trapped Captain Fetterman and wiped out the entire force. The Indians called it the “Battle of the Hundred Slain.” Under Red Cloud, the Indians isolated the forts and harassed supply columns, making it impossible for the U.S. military to maintain a presence. The U.S. acknowledged defeat and sued for peace. This is the only time any Indian leader totally defeated the United States in a war.

The result was the 1868 Fort Laramie Treaty in which the U.S. withdrew its military forces from the Black Hills and Bighorn Territory. It created the Great Sioux Reservation, on which the U.S. hoped the majority of Indians would eventually settle and take up agriculture, with American aid. The Treaty also affirmed that the Black Hills was Sioux land, and that the Sioux had hunting rights (but not permanent resident rights) in the area north of the North Platte River, and east of the summits of the Bighorn Mountains (unceded Indian Territory).

Crazy Horse would not sign the 1868 Treaty. He and other Indians believed they had a right to reside in the hunting areas, as had been their tradition for many years.

The wording of the Treaty left doubts about the rights of U.S. military incursions and U.S. government railroad surveys. Article II of the Treaty spelled out the Great Sioux Reservation territorial boundaries, including the Black Hills, and indicated it as “set apart for the absolute and undisturbed use and occupation of the Indians herein named” and further stated: “the United States now solemnly agrees that no persons except those herein designated and authorized so to do, and except such officers, agents, and employees of the Government as may be authorized to enter upon Indian reservations in discharge of duties enjoined by law, shall ever be permitted to pass over, settle upon, or reside in the territory described in this article….” While seeming to protect the Lakota from incursions on their Reservation by Americans, the wording was such that military incursions ordered by Washington could be permitted. This led to the large 1874 Custer expedition into the Black Hills to set up a fort to protect future surveys and construction. This expedition discovered gold, and advertised it, leading to the invasion of the Black Hills by prospectors and miners.

Red Cloud and Spotted Tail personally negotiated with President Ulysses S. Grant in 1870 in Washington, D.C. There were misunderstandings of the terms of the Treaty of 1868. The U.S. wanted the main Indian agency on the Missouri River, which Red Cloud had never agreed to, even though it was in the written Treaty. Spotted Tail had moved the Brule to the Missouri, but Red Cloud refused to move his people. The interpreters of 1868 were blamed. Red Cloud insisted that the Powder River country in Wyoming was part of the Sioux land, not just the formal Sioux Reservation (in South Dakota). President Grant and his Secretary of the Interior changed their interpretation of the Treaty to match that of Red Cloud. It was reaffirmed that the Sioux (and other tribes) could live in the Powder River country, as well as hunt in it. This was another victory for Red Cloud. It lasted about 3 years.

In August, 1873, the Red Cloud and Spotted Tail agencies were moved to the White River in northwest Nebraska (next to Fort Robinson), to live mostly on government rations – although when rations were scarce, some would leave the agencies and hunt in the unceded Territory. The settlers and land developers had wanted those Indians settled in the Powder River Basin to move out. In spite of President Grant’s promise in 1870, the government had kept up the pressure by delaying rations, until they finally moved. (Red Cloud was actually away from his agency, with Oglala buffalo hunting parties, when this move took place. He later protested and threatened war.) The roving bands of thousands of younger warriors and their families following Crazy Horse and Sitting Bull remained in the Dakota, Wyoming, and Montana territories that had been agreed to as Sioux (and Cheyenne and Arapahoe) hunting lands.