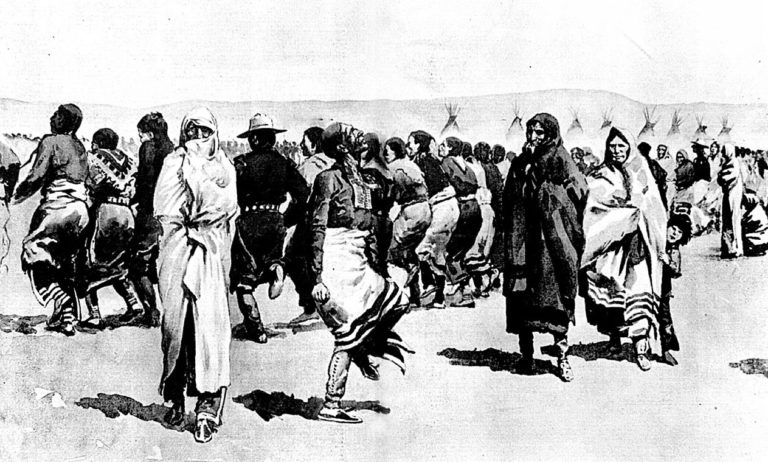 In the summer of 1874, Lt. Colonel George Custer led a large expedition including about 1,000 troops with scientists and reporters into the Black Hills, officially to explore and set up a military post to control the non-signed Indians. But the real purpose, as indicated by the presence of geologists, was to identify areas for gold mining. This expedition discovered gold, and advertised this to the media and public.

This led to a rush to the Black Hills by thousands of miners. The “Yankton Press & Dakotaian” newspaper editorialized about the 1868 Treaty: “This abominable compact is now pleaded as a barrier to the improvement and development of one of the richest and most fertile regions in America. What shall be done with these Indian dogs in our manger? They will not dig gold or let others do it.”

At first, the U.S. tried to stop prospectors from moving into the Black Hills. In September of 1874, General Sheridan sent instructions to Brigadier General Alfred H. Terry, Commander of the Department of Dakota, directing him to use force to prevent companies of prospectors from trespassing on the Sioux Reservation.

At the same time, Sheridan let it be known that he would “give a cordial support to the settlement of the Black Hills,” should Congress decide to “open up the country for settlement, by extinguishing the treaty rights of the Indians.” This was published in newspapers at the time. In 1875, General Crook was assigned to forcibly remove the thousands of miners – which proved impossible. By January of 1875, there were 15,000 miners in the Hills.

In the Spring of 1875, Red Cloud, Spotted Tail, and other chiefs were summoned to Washington to meet with President Grant and discuss the Black Hills. The U.S. wanted the Black Hills, and would send a commission later in the year to arrange a purchase price. The Indians didn’t want this, and argued among themselves on what they should do.

The U.S. Senate Commission visited the Nebraska agencies in 1875 to negotiate an outright purchase price for the Black Hills of $6 million. Red Cloud, Spotted Tail (the “agency” chiefs) and Crazy Horse and the non-settled warriors refused. The Commission also tried to get the chiefs to change the terms of the 1868 Treaty, and to pay the Sioux a $400,000 annual rental to allow safe passage for the prospectors and settlers. Of course, the chiefs refused this also, and indicated they would protect the Black Hills from this invasion if the U.S. would not honor its Treaty obligation to do so.

President Grant then decided to abandon the treaty obligation of the United States to preserve the Lakota Territory. In a letter dated November 9, 1875, to General Terry, Sheridan stated that he had met with President Grant, the Secretary of the Interior, and the Secretary of War, and that the President had decided that the military should no longer try to keep miners from occupying the Black Hills: “it being his belief that such resistance only increased their desire and complicated the troubles.” These orders were to be enforced “quietly,” and the President’s decision was to remain “confidential.”

It was a wild and violent situation, with Indians attacking miners, miners and settlers attacking Indians, and ransacking by outlaws against Indians and miners alike. The U.S. Government concluded that the only remaining option was to protect the U.S. citizens mining in the Black Hills for gold.

On December 6, 1875, the U.S. Commissioner on Indian Affairs ordered the Lakota onto the reservation by January 31, 1876, threatening to treat them as “hostiles” and have them arrested if they did not meet this deadline. The Sioux bands were scattered during this harsh winter, some didn’t get the order; others were hunting or camped in the unceded Indian Territory (which was their right). On February 1, 1876, the Secretary of the Interior relinquished jurisdiction over all so-called “hostile” (non-agency) Sioux – those Indians lawfully hunting in the non-reservation territory – to the War Department. The Army was ordered in.

The 1868 Treaty had been abandoned. While Sitting Bull and Crazy Horse gathered the bands for the coming assault, Red Cloud (Oglala) and Spotted Tail (Brule) kept their followers at the agencies near the White River in northwest Nebraska.

The U.S. Cavalry, led by Lt. Colonel George A. Custer, advanced on the large Indian encampment along the Little Bighorn River with a three-pronged attack on June 25, 1876. Trapped between warrior forces without reinforcement or his ammunition supplies, Custer and his 207 troops were wiped out. Custer and his men became martyrs, and the fate of the Great Sioux Reservation would soon be determined.

On September 9, 1876, the battle of Slim Buttes occurred about 70 miles north of the Black Hills, involving about 2,000 troops from General Crook’s large force. The soldiers, both infantry and cavalry, had been pursuing the Indians all the way from southeastern Montana in a circuitous route covering about 300 miles. Casualties were fairly light on both sides, considering the number of combatants.

Crazy Horse and his Oglalas continued to harass the soldiers as they marched to the Black Hills, but they could not engage such a large U.S. military force successfully or stop the army from occupying the Black Hills. The battle set the pattern for the relentless pursuit of the Indians and the destruction of their provisions. Some Lakota call it: “The Fight Where We Lost The Black Hills.”