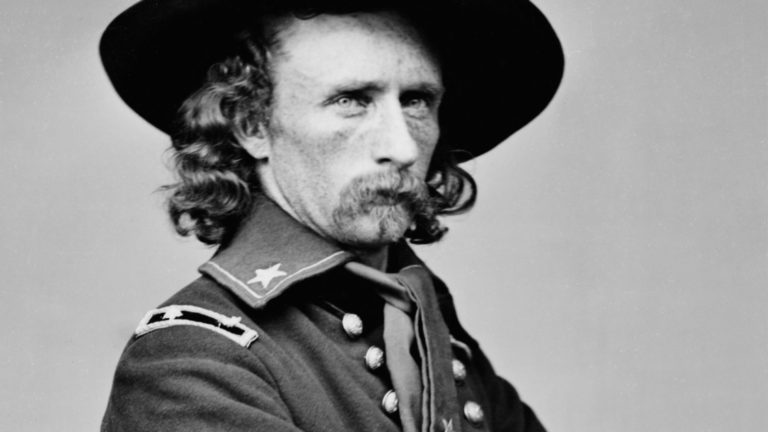 George Armstrong Custer was born to Emanuel Henry Custer and Maria Ward Kirkpatrick Custer in New Rumley, Harrison County, Ohio, on December 5th, 1839. George obtained an average education, and after graduating engaged for a time in teaching school. In June of 1857, he obtained an appointment to the United States Military Academy at West Point, and entered that institution on July 1, 1857. This was made possible through the influence of John A. Bingham, a member of Congress from Ohio. He graduated on June 24, 1861, with what was considered the fair standing of No. 34 in one of the brightest classes that ever left the academy. He was immediately commissioned as second lieutenant in the 2nd Cavalry.

Serving during the first two years of the Civil War on the staffs of Generals McClellan and Pleasanton, Custer saw action in the Peninsular, Antietam, and Chancellorsville campaigns. He was assigned command of the Michigan cavalry brigade, given his own star, and with it took part in the Gettysburg, Bristoe, and Mine Run campaigns.

At Gettysburg he remained with General Gregg east of town to face Jeb Stuart’s threat to the Union’s back flank, although he was previously ordered to the south. The combined Union force defeated Stuart. In Grant’s Richmond drive in 1864, Custer participated in the fight at Yellow Tavern where Stuart was mortally wounded. His wife, Elizabeth Bacon Custer, whom he married in February 1864, was with him at the front during the last year of the war, and also accompanied him in his nine years of service in the west.

Transferred to the Shenandoah Valley with his men, he played a major role in the defeat of Early’s army at Winchester and Cedar Creek, commanding a division at the latter. Returning to the Army of the Potomac in early 1865, he fought at Five Forks; and in the Appomattox Campaign. His victories against the rebel cavalry came at a time when that force was a ghost of its former self. Custer was brevetted in the regulars through grades to major general for Gettysburg, Yellow Tavern, Winchester, Five Forks, and the Appomattox Campaign. General Custer received the first flag of truce from the Army of Northern Virginia, and was present at the surrender at Appomattox Court House. He was brevetted major general for his services in the last campaign, and appointed major general of volunteers, to date from April 15, 1865.” He had participated in all but one of the battles of the Army of the Potomac. It is reported that eleven horses were shot from under him in battle.