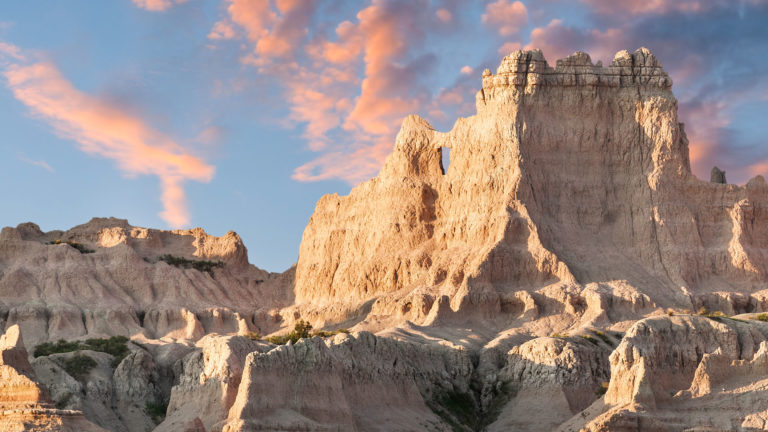 The unique and varied landscapes of the Black Hills and Badlands region are a geology student’s dream. The following is a general overview of the four geologic formations that make up the Black Hills region. Examples of these formations are evident in may areas of the Hills: the walls of Spearfish Canyon; Black Elk Peak, Mount Rushmore and Crazy Horse Memorials; Devils Tower, the Needles; Bear Butte; and the Badlands to name only a few of the most obvious examples. Here is a simplified overview of the formation of the Black Hills and Badlands:

In general, the oldest rocks in South Dakota were formed more than 2 billion years ago, during the Precambrian Period. They consist of the granites and metamorphic found in the core of the Black Hills.

In the Black Hills of western South Dakota, great sheets of granite intruded the igneous and metamorphic rocks. This Harney Peak granite provided the solid base for the carving of Mt. Rushmore. Many thousands of pegmatites were also formed during Precambrian time. In the southern Black Hills, these pegmatites contributed to the mining economy of the region with their crystals of feldspar, quartz, mica, beryl, and lithium minerals. Some have also been mined for tin and tungsten.

By the end of the Precambrian (570 million years ago), South Dakota had been deeply eroded and worn to a nearly flat plain interrupted by low knobs of granite and ridges of resistant quartzite. The top of Precambrian rocks in South Dakota slopes generally from east to west across all but the southwestern part of the state.

During the latter part of Precambrian time and into the early Paleozoic, South Dakota’s surface was severely eroded forming a relatively flat plain interrupted by low knobs and ridges of resistant rocks. The first sea to advance over South Dakota’s Precambrian surface covered the western part of the state. For most of Paleozoic era, water lapped on and off the state repeatedly, as continental seas advanced from and retreated to the oceans. With each advance and retreat, new rock layers of sandstone, shale, and/or limestone were deposited.