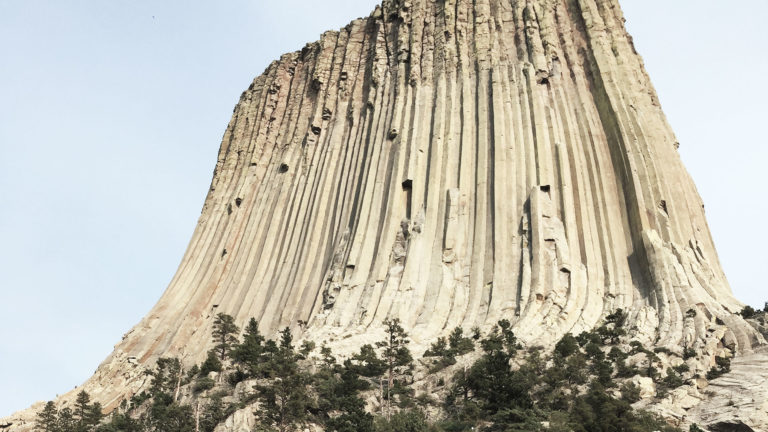 Located on the northwestern edge of the Black Hills, Devils Tower Rises 1,267 feet above the Belle Fourche River to an altitude of 5,112 feet.

The tower measures 800 feet wide at its base diameter, and tapers up to a width of 300 feet at its top. According to geologists, this formation is a result of molten rock(magma) that cooled in the core of an ancient volcano. Eons of erosion gradually wore the layers of softer stone and materials away, exposing the igneous column. The nearly parallel vertical columns on the tower’s sides are a visible result of this dynamic geologic process.

This unusual natural formation has been a part of Northern Plains lore for centuries. The tower was a guide for travel in the region, as it could be seen for a great distance from many directions. Many Native Americans of the Northern Plains revere the tower as “wakan,” which in Lakota means a sacred or holy place. The culture and legends of at least six extant tribes(the Lakota Sioux, Crow, Kiowa, Cheyenne, Arapaho, and Shoshone) contain references and attach religious significance to the area.

The most recent Native Americans to occupy the lands around Devils Tower were the Lakota Sioux; the tower’s Lakota name is Mato-Tipi – Bears’ Lodge, or dwelling place of the bears. Traditional religious observances of the various tribes still occur at the tower. The name was changed by a U.S. Army map and report in the 1860s, and the new name stuck – Devils Tower.

This regional curiosity was designated by President Theodore Roosevelt as the nation’s first National Monument in 1906. Roosevelt said in the declaration, “this lofty and isolated rock in the State of Wyoming, known as ‘Devil’s Tower,’ situated upon the public lands owned and controlled by the United States, is such an extraordinary example as to the effect of erosion in the higher mountains as to be a natural wonder and an object of great scientific interest and it appears that the public good would be promoted by reserving this tower as a National monument.”

The first recorded climb of the tower was by a pair of local ranchers in 1893. Today, thousands of climbers enjoy the column for its very unique and challenging routes. Convenient hard-surfaced roads lead to the Tower from Sundance, Moorcroft, and Belle Fourche. A variety of wildlife and scenic vistas surround the tower, plus an informative Visitors Center provides geologic, cultural and historic interpretation of this remarkable site.