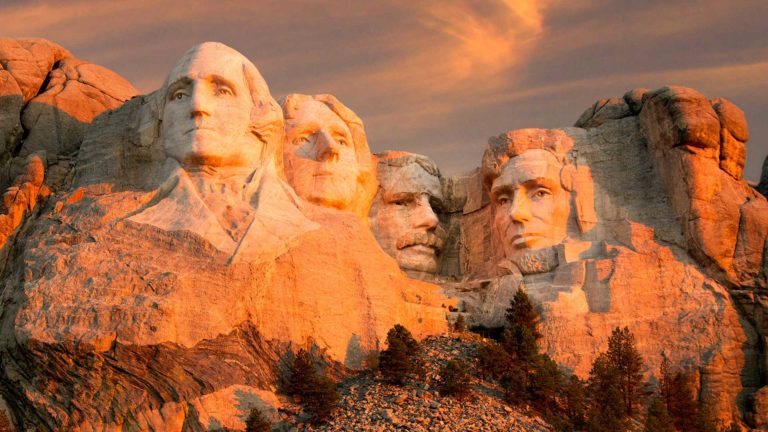 During the early 1920s, South Dakota State Historian Doane Robinson and others first envisioned Old West heroes carved on the granite spires of the Needles. From 1924 to 1925, state officials sought the talent of sculptor Gutzon Borglum, who had been working on a Confederate memorial on Stone Mountain in Georgia. Convinced of the project’s potential in South Dakota, Borglum came to the Black Hills. Borglum decided that four presidents representing the first 150 years of American history would be the most appropriate subject for a carving. He also pronounced the granite of the Needles too fragile for a carving such as he envisioned. He and local guides explored the central Hills to locate a body of granite that would be both substantial enough for carving and positioned to receive proper natural illumination from the south. In the end, Rushmore Mountain near Keystone was chosen for the project.

President Calvin Coolidge formally dedicated the project on August 10, 1927, and efforts continued on the carving of Mount Rushmore for the next fourteen years.

Borglum faced a multitude of challenges with the massive sculpture: finances, weather conditions, dealing with cracks and pockets of poor quality rock on the mountain, developing specialized methods for blasting the granite, and devising methods of hoisting the workers and tools safely to the top of the carving. In spite of the difficulties, the likenesses of George Washington, Thomas Jefferson, Theodore Roosevelt, and Abraham Lincoln gradually emerged from the mountain.

When Borglum died in March 1941, officials turned the project over to his son, Lincoln, for completion. Due to the escalation of World War II and the lack of funds, the figures were never completed—Borglum’s original vision included the figures sculpted down to their waists—but the monument remains iconic.

Your trip to Mount Rushmore should include a visit to the Lincoln Borglum Visitor Center and Museum—which shows an educational movie—the Presidential Trail, Carvers Cafe, the Mount Rushmore Bookstores, the Mount Rushmore Audio Tour, the Gift Shop, and the Sculptor’s Studio. Attending the evening lighting ceremony in the summer is also a spectacle not to miss!

The visitor facilities at the Monument are open all year, seven days a week, with the exception of December 25, when buildings are closed
but grounds are open.

There is no admission fee charged to see the Memorial, as per the wishes of Borglum himself. However, a fee-based system provides convenient parking: $10 per vehicle and $50 per bus.

Walk the half-mile loop (includes 422 stairs) for unique views from the
base of the Monument.

This ceremony includes a ranger talk, a 20-minute film, and the lighting of the sculpture. Military and veterans are invited on stage to participate in a flag-folding ceremony. The ceremony is held in the amphitheatre from May to mid-August at 9 p.m., and mid-August through September 30 at 8 p.m.