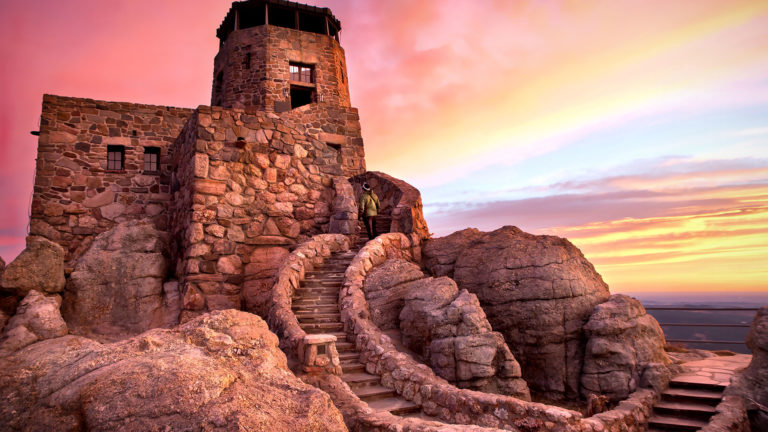 At the Highest Point

Black Elk Peak, formerly Harney Peak, is the highest summit between the Pyrenees Mountains in France and the Rocky Mountains. An old stone fire lookout tower is located at the summit. It is no longer in operation, but hikers can explore the tower as they marvel at the incredible views. On a clear day, four states can be seen from the top – South Dakota, Wyoming, Montana, and Nebraska.

In August 2016, Harney Peak was renamed Black Elk Peak, after the Lakota holy man who received his “great vision” when he was nine years old.

When he described his vision, he stated, “I was standing on the highest mountain of them all, and round about beneath me was the whole hoop of the world. And while I stood there, I saw more than I can tell and I understood more than I saw; for I was seeing in a sacred manner the shapes of all things in the spirit, and the shapes of all shapes as they must live together like one being.”

The first recorded ascent by a non-native was Dr. Valentine McGillycuddy during an exploration in 1875. He later became Crazy Horse’s friend when the Lakota leader was on his deathbed. He worked as Indian Agent for the Pine Ridge Agency, and created a Native American police force and set up boarding schools for native children. Red Cloud described him as a “young man with an old man’s head on his shoulders.”

After his death in 1939, his ashes were entombed at the top of Black Elk Peak. A plaque at the site reads “Valentine T. McGillycuddy, ‘Wasicu Wakan’, 1849-1939.” Wasicu Wakan is Lakota for “Holy White Man.”

The most popular hike is Trail 9 from Sylvan Lake, which is about 7 miles. Other popular trails include Trail 4, Norbeck Trail, and Grizzly Bear Trail. Most trailheads begin in Custer State Park.

The hikes all are fairly long and raise in elevation considerably, so wear comfortable hiking shoes and bring lots of water!