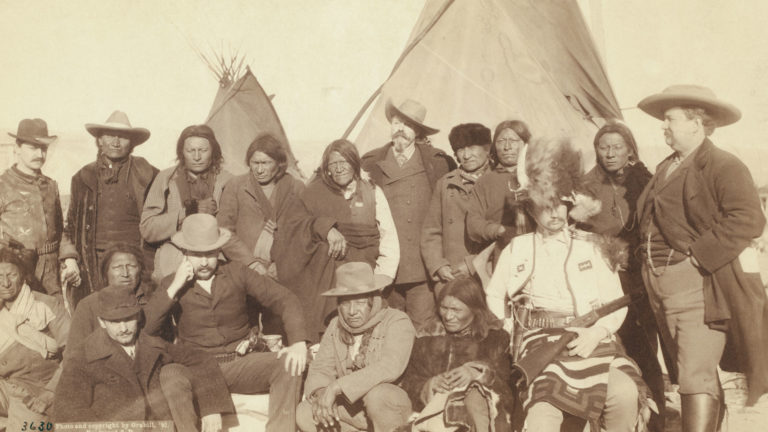 A Brief History of the Black Hills from 1800

The following is by no means a comprehensive story of the Black Hills, nor is it meant to be. It is meant only to give a general view of the last 250 years of regional history.

The first recorded mention by Europeans of a range of mountains west of the Missouri River came in 1743 when the Black Hills were apparently seen by members of the Verendrye Party, who were looking at various trading opportunities for France beyond the Mandan villages along the Missouri River. The mention of snow-capped mountains comes in a journal entry from January of 1743. It is not believed that the Verendrye group came to the Hills.

By 1800, while the United States was less than 25 years old, and the Lakota Sioux people had occupied the Black Hills region for about 25 years. Inventors in Europe and America were experimenting with early variations of the steam locomotive that would alter the American landscape forever and, in the field of politics, a major step was about to be taken in the expansion of the United States and in the future of the Black Hills region.

The Black Hills are in the northern part of the Louisiana Purchase, for which, in 1803, the United States paid France the sum of 80,000,000 francs ($15,500,000). The extreme northwestern part of the New Northwest was secured under the claim of discovery and exploration, based particularly on the work of the Lewis and Clark Expedition in 1804-1806. Louisiana had been held first by France under claim of discovery by La Salle in 1682. In a treaty entered into at Paris in 1763, Louisiana came into the possession of Spain. In 1800 Napoleon Bonaparte conceived the idea of a great colonial empire in America, and by promises of political aid to Spain secured the return of Louisiana to France. His plans of empire miscarried, and in 1803 he was ready to sell this magnificent domain for a trifle . . .

William Clark and Meriwether Lewis were commissioned by President Thomas Jefferson to explore this vast new holding. At the mouth of the Cheyenne River in the summer of 1804, they made the acquaintance of John Valle, a local trader. Valle made mention of the Black Mountains where he had spent some time trapping. He estimated the Black Mountains were 160 leagues west of their encampment.