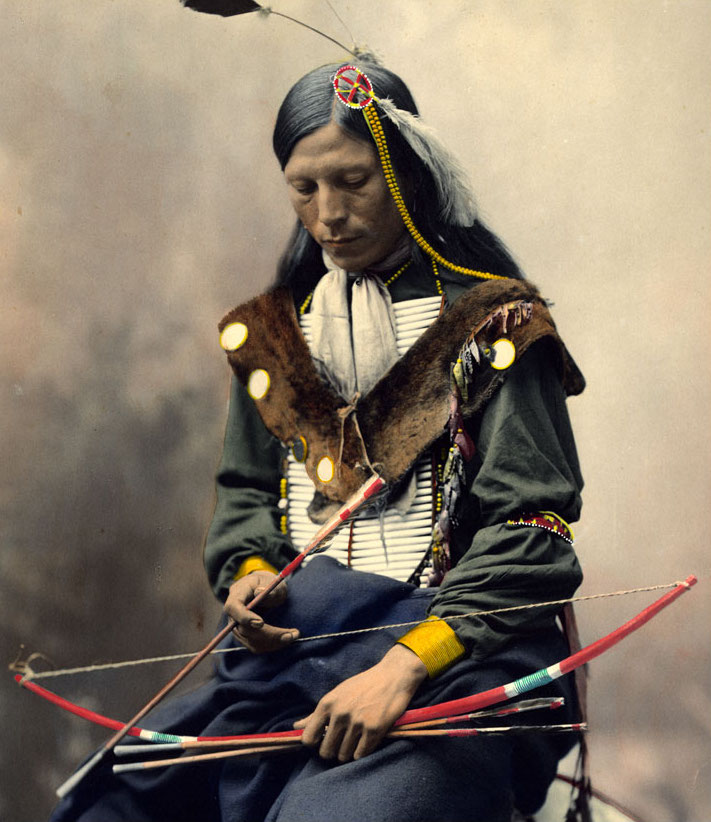 Red Cloud continued his struggle with government agents in the early 1880s to preserve the traditional authority of the chiefs. He fought against the Dawes Act of 1887-89 which divided tribal land into individual allotted tracts and took away half the Sioux land (of 1868) for use by whites. During this confrontation he faced down General Crook, the government’s chief negotiator, at Pine Ridge in 1889.

Behind Red Cloud’s leadership the majority of the Oglala stood firm against the agreement. But enough defections took place on the other reservations that the required 75% approval was obtained.

In 1888 Red Cloud invited the Jesuit Order to establish a school for Lakota children. This proved to be a wise decision because it kept Indian children on tribal land, and allowed them to be able to associate with their families and friends.

Many Horses, an Oglala medicine man, organized one of the first Ghost Dances in 1890, a cultist ceremony which many of the Sioux believed would lead to the withdrawal of the U.S. military and the resurgence of the Plains Indian way of life.

On December 29, 1890, the U.S. military intercepted the Miniconjous under Spotted Elk at a point on Wounded Knee Creek. The band was returning from a Ghost Dance and seeking refuge at the Pine Ridge Agency.

The soldiers disarmed the Indians and stacked their weapons (only two rifles were found during a later search of the Indian tents). Reportedly, a shot was fired by one Indian, killing an officer, and the soldiers went on a killing spree, massacring 200-300 men, women, and children, many of whom were just fleeing for their lives.

As for Sitting Bull, he and his followers had escaped into Canada in May of 1877. Starving, they surrendered in 1881. Sitting Bull toured with Buffalo Bill Cody’s Wild West Show and eventually returned to the Standing Rock Reservation. Tribal police tried to arrest Sitting Bull during the Ghost Dance craze of December 1890, and he was killed during the ensuing shootout.

With the death of Sitting Bull and the massacre at Wounded Knee came a symbolic end to the Cavalry and Indian Wars on the Great Plains.