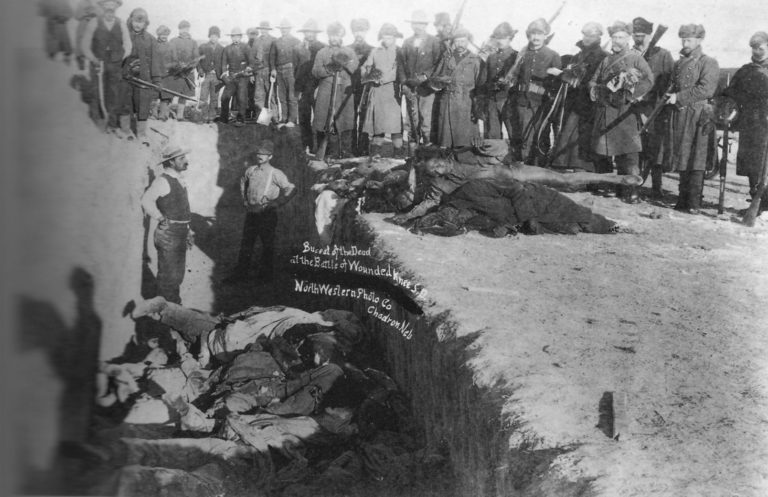 On the frigid morning of December 29, 1890, the Miniconjou Chief Spotted Elk and some 350 of his followers were camped on the banks of Wounded Knee Creek. Surrounding their camp was a force of U.S. troops charged with the responsibility of disarming Spotted Elk and his warriors. Trouble had been brewing for months.

The once proud Sioux Nation found their free-roaming life gone, the buffalo vanished, and themselves confined to reservations dependent on Indian Agents for their existence.

In a desperate attempt to return to the days of their glory, many sought salvation in a new mysticism preached by a Paiute shaman called Wovoka. Emissaries from the Sioux in South Dakota traveled to Nevada to hear his words. Wovoka called himself the Messiah and prophesied that the dead would soon join the living in a world in which the Indians could live in the old way surrounded by plentiful game. A tidal wave of new soil would cover the earth, bury the whites, and restore the prairie. To hasten the event, the Indians were encouraged to dance the Ghost Dance. During the fall of 1890, the Ghost Dance spread through the Sioux villages of the Dakota reservations, revitalizing the Indians and bringing fear to the whites. A desperate Indian Agent at Pine Ridge wired his superiors in Washington, “Indians are dancing in the snow and are wild and crazy…. We need protection and we need it now.” The order went out to arrest Chief Sitting Bull at the Standing Rock Reservation. Sitting Bull was killed in the attempt on December 15.

When he heard of Sitting Bull’s death, Spotted Elk led his people south to seek protection at the Pine Ridge Reservation. The army intercepted the band on December 28 and brought them to the edge of the Wounded Knee to camp. The military, led by veteran General Nelson Miles, geared itself for another campaign. Miles sent out the infamous Seventh Cavalry led by Major Whitside to locate the renegades.

They scoured the Badlands and finally found the Miniconjou on Porcupine Creek, 30 miles east of Pine Ridge. The Indians offered no resistance. Spotted Elk, ill with pneumonia, rode in a wagon. The soldiers ordered the Indians to set up camp five miles westward, at Wounded Knee Creek. Colonel James Forsyth arrived to take command and ordered his guards to place four Hotchkiss cannons in position around the camp. The soldiers now numbered around 500; the Indians 350, all but 120 of these women and children.

The following morning, December 29, 1890, the soldiers entered the camp demanding that all Indian firearms be relinquished. A medicine man named Yellow Bird advocated resistance, claiming the Ghost Shirts would protect them. One of the soldiers tried to disarm a deaf Indian named Black Coyote. What happened next, and which person or party fired first is still a matter of debate.

Nevertheless, the silence of the morning was broken and soon other guns echoed in the creek bottom. At first, the struggle was fought at close quarters, but when the Indians ran to take cover, the Hotchkiss artillery was opened up on them, cutting down men, women, children alike – Spotted Elk among them. By the end of the atrocity, which lasted less than an hour, at least 150 Indians had been killed and 50 wounded. In comparison, army casualties were 25 killed and 39 wounded.

A typical opinion of the day is the following:

We cannot honestly regret their extermination, but we at least do justice to the manly characteristics possessed, according to their lights and education, by the early Redskins of America. By L. Frank Baum, author of The Wizard of Oz – editor of the Aberdeen American News writing at the time of the Wounded Knee tragedy.

As the remaining troopers began the grim task of removing the dead, a blizzard swept in from the north. A few days later they returned to complete the job. Scattered fighting continued, but the massacre at Wounded Knee effectively squelched the Ghost Dance movement and ended the Indian Wars. Forsyth was later charged with killing the innocents, but was acquitted of the charges.

For a fascinating and educational overview of the battle, visit Wounded Knee, The Museum in Wall, SD.

See a related story about HBO’s film, Bury My Heart at Wounded Knee.