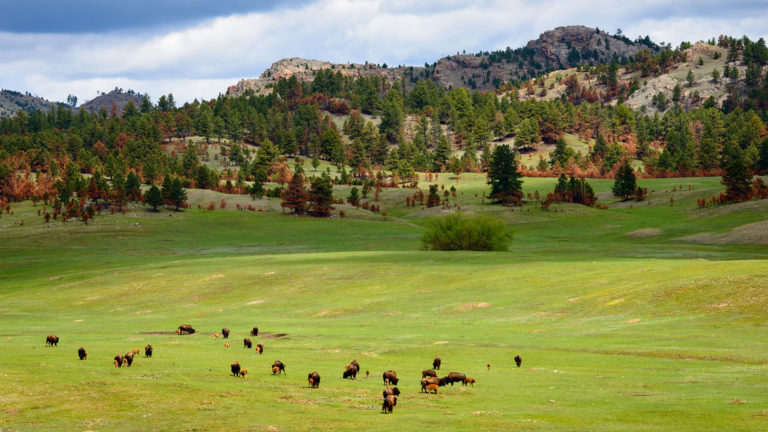 Buffalo and the Black Hills Region

Through pioneering and contemporary conservation efforts, the American bison, or as it is more commonly referred to – the buffalo, has become synonymous with the Black Hills region. This is in itself remarkable considering that less than 500 bison were left on the continent in the late 1880s.

The pre-historic bison’s first known contact with early man occurred between 11,000 and 25,000 years ago when they were hunted by nomadic tribes. Bison have apparently evolved dramatically since then to adapt to warmer climates and other changes in their environment.

For centuries, Native Americans had relied on the bison to provide them with food, clothing, tools, shelter, and to a certain extent, as an object for worship. In the 1500’s, the Spanish introduced horses to the New World, which were put into use by the native people to follow the great bison herds.

The first Europeans to lay their eyes on bison were fascinated by the animals. Estimates of the herds that roamed the Great Plains between the 1700’s and early 1800’s ranged from 30 to 200 million animals.

Though archeologists have found remains of the bison in southern Mexico, Northern Canada, Florida, California, Virginia, and up and down both coastlines, the bison’s true home was the vast grasslands that stretched from one end of the continent to the other.

The elimination of the bison by Americans and others began in the 1860s. Hundreds of thousands of bison were killed by contract hunters for only their hides or tongues, then left to rot in the hot sun. Mounted heads and live buffalo were sent on tour and for display in the East. The buffalo caused almost a “gold rush,” as wearing or possession of buffalo products became a status symbol. General Phillip Sheridan, commander of the United States Army Cavalry, advocated the wholesale slaughter of the bison to help subdue the Native Americans during the Indian Wars. He stated that the buffalo hunters did more in five years to defeat the Indian nations than the army had done in fifty.

As ranchers moved north and west into the northern Great Plains, they too clashed with the bison herds as ranching and poor grazing management helped to drive the bison to near extinction. By the late 1880s and early 1890s less than 500 bison were left. A few of the remaining bison were saved by ranchers, including South Dakotan Scotty Philip. Through their foresight, the American bison began a slow return.

Today, there are approximately 375,000 head of bison throughout North America. A majority of these animals reside in public and tribal herds, with others on private ranches and wildlife preserves. Demand for buffalo products in the form of gourmet and low cholesterol meats; hides for clothing and furniture; and even fur for textile weaving increases yearly. The Bison has again become an imposing symbol of the spirit that is a part of our collective American heritage.