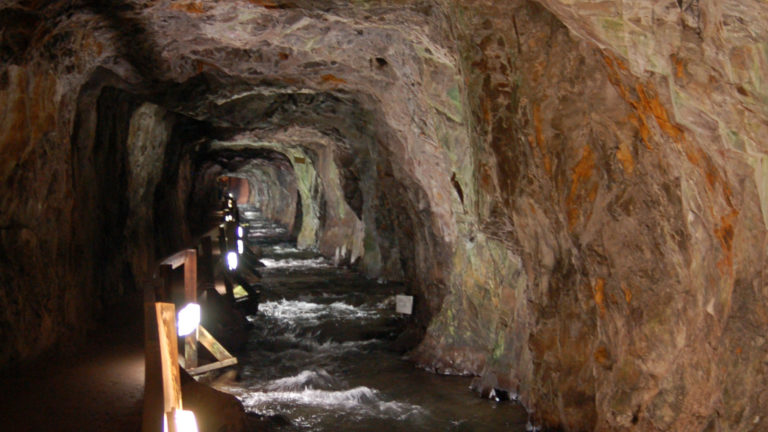 Caving in the Black Hills

Deep under the ponderosa pine forests and sprawling prairies of the Black Hills, there is an underground world of tunnels filled with unique geological formations. Caves of the Black Hills have captured the imagination of Native Americans, settlers, geologists from around the world, and tourists alike. This is a spelunkers paradise with two of the 10 longest caves in the world being in the Black Hills. Explorers will want time to see it all!

Wind Cave is not only one of the longest cave systems in the world, but also has 95% of the world’s discovered boxwork rock formations, which is thin blades of calcite that project from the cave walls or ceilings. It is the sixth longest cave in the world with 140 miles explored, and is also the most dense (passages per mile) in the world. It is a sacred site for the Lakota people, as creation stories say this is where their people emerged from the earth.

Tips: Tours on cave trails are often dimly lit, slippery, and require maneuvering to get through low ceilings; watch your step. Check their website for current admission fees.

Custer’s Jewel Cave is longer than Wind Cave with 181 miles currently explored, making it the third longest in the world. It was called Jewel Cave because of the large calcite crystals found here.

While privately owned, Black Hills Caverns is kept as natural as possible with no elevators and no escalators. There are a huge variety of rock formations in this cave including boxwork, rare frost crystal, flowstone, soda straw stalactites, popcorn crystals, stalactites, stalagmites, and more!

Wonderland Cave was discovered in 1929 by two loggers searching for a lost dog. They had a brief and unsuccessful search for gold before opening the cave for tours. It has the largest variety of formations in the area.

Tips: For the tour, visitors must climb 100 steep steps. For current tour offerings check their website.

Rushmore Cave is the closest tourist cave to Mount Rushmore and has a large variety of rock formations, including boxwork and dripstone formations. It is located near Rush Mountain Adventure Park, and cave tour tickets can be bought in packages with rides and other attractions