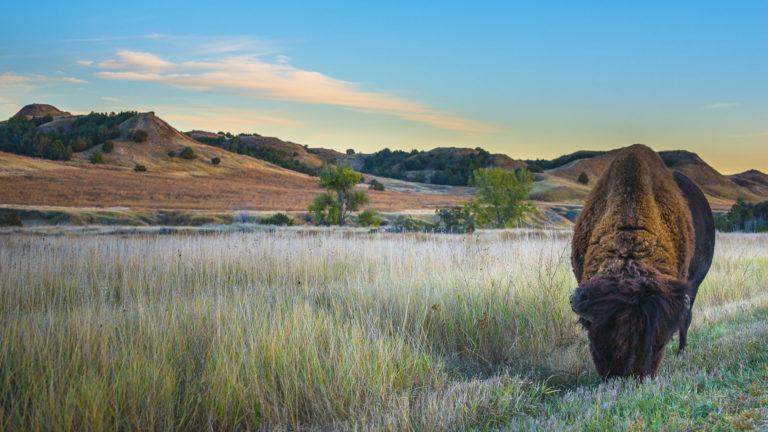 Everything You Need to Know About Bison

Bison, also called buffalo, are the largest land mammal in the North America. They stand from five to seven feet tall at the shoulder, and can be an intimidating 12 feet tall including their heads. While they often weigh over a ton (2000 lbs.), bison can run at speeds up to 40 miles an hour.

They are herbivores, with their diet consisting of grasses, shrubs, and twigs.

Due to their size, bison have few predators. They are preyed upon by wolves, mountain lions, and bears, although usually only very young or old animals are targeted.

For centuries before Europeans came to the New World, native tribes relied on bison for food, clothing, tools, and shelter. Bison were also a spiritual symbol to some tribes, such as the Lakota.

The coming of the White Buffalo Woman is central to the Lakota religion. She brought the seven sacred rites and gave the sacred ceremonial pipe to the Lakota people. After bestowing these gifts, she transformed into a white buffalo calf.

Lakota holy man John Lame Deer once said, “a white buffalo is the most sacred living thing you could ever encounter.”

With the introduction of horses and guns in the 16th century, Native Americans were able to more efficiently hunt bison.

However, with the introduction of this new technology came traders, trappers, and settlers who hunted bison not only for food, but the hide, and sometimes even sport, as well.

“It provided us our shelter, our food, our weapons, our toys — we played with the toe bones, that we called bone horses — and we made the ribs into sleds. So it provided us with everything. And it’s also a spiritual connection. It’s impossible to totally explain how important the buffalo is to us. The buffalo is life.”

When they arrived in the plains, Europeans were fascinated by the strange animals. Bison populations in the Great Plains were estimated to be from 30 to 200 million.

However, overhunting in the 19th century caused a rapid decline in their population. The elimination of the bison began in the 1860s — bison were killed by hunters for only their hides or tongues, then left the remains to rot. Both mounted heads and live bison were sent on tour and for display on the East Coast, and wearing or possessing bison products became a status symbol.