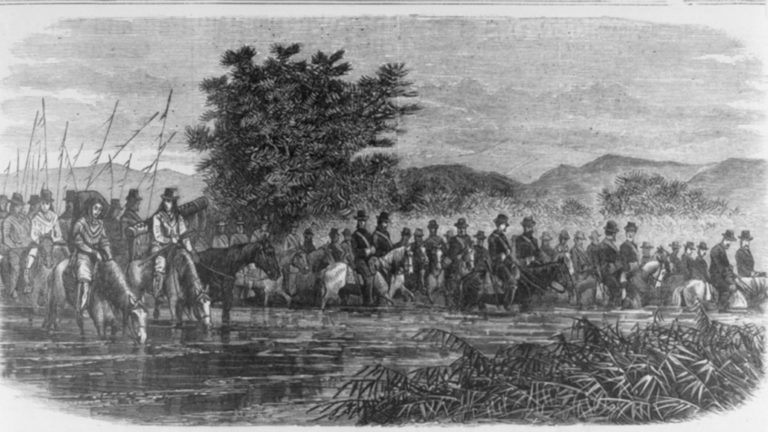 Crook was born into a farm family on September 8, 1828, near Taylorsville, Ohio, not far from Dayton. Graduating from West Point on July 1, 1852, he stood 38th in a class of 43 and received a commission as a brevet second lieutenant in the 4th Infantry. He spent the first part of his military career in the Northwest fighting Indian tribes. It was in this region and time that Crook learned how to operate under frontier conditions that often left his raw, unseasoned troops short of supplies.

Considered by many historians to be the U.S. Army’s greatest Indian fighter, George Crook earned that reputation by developing a respect for his enemy that carried over into his relationships with Native Americans off the battlefield as well.

“When they were pushed beyond endurance and would go on the warpath, we had to fight when our sympathies were with the Indians.” Crook later said. Nevertheless, he led successful campaigns against the Shoshone and Nez Perce and others in Washington, Oregon and California.

Crook commanded by example, often being first to rise in the morning and first in the saddle. His unique Indian fighting style included extensive use of Indian scouts, a relentless pursuit of Indians on their own territory and willingness to negotiate rather than engage in battle.

The outbreak of the Civil War in 1861 brought Crook back to the East, where he was promoted to captain and served in guerrilla actions in West Virginia at the battles of Second Bull Run and Chickamauga. He was brevetted Major General of Volunteers in July 1864 and put in command of the Army of West Virginia. In late February 1865, he was captured by Confederate guerrillas but was exchanged the next month. He was brevetted Brigadier and Major General, U.S. Army on March 14, 1865.

After Civil War service, Crook was awarded the rank of lieutenant colonel and sent back to the Pacific Northwest to subdue the Paiute. After a successful two-year campaign there, President Ulysses S. Grant personally placed him in charge of Arizona Territory to end hostilities between the Apaches and whites by placing the Apache on reservations.

Crook offered a simple philosophy to the Indians he encountered —it did not matter who had started the trouble, but it must not continue. He told them he would protect them from bad whites, but the chiefs would have to protect the whites from bad Indians. If they let the bad Indians raid and steal and kill, it would be impossible to protect Indians who obeyed the law.

Crook knew more whites were coming, and Indians could no longer live on wild game, which was already beginning to disappear. He believed that until the Indians learned the ways of white society they would be safe only on reservations. And he believed that as soon as the two races stopped fighting and came to trust each other, the Indians would be able to go anywhere to live and work. Crook promised he would try to find work for Indians who wanted it, and those workers would be paid the same wages as whites. He also said that all promises he made would be written down and copies would be given to the chiefs. By the fall of 1872, Crook had brought peace to the Arizona Territory after crafting a treaty with Cochise, which the chief kept until his death two years later.

President Grant promoted Crook to brigadier general and he remained in Arizona two more years, upgrading military facilities and championing humane treatment of the Apache and other tribes. Though Crook was opposed to sending Indian children to boarding schools in the East, he was thwarted in efforts to establish schools on all reservations.

Captain John Bourke described Crook as “An ideal soldier in every sense. He stood about six feet in his stockings, was straight as an arrow, broad shouldered, lithe, sinewy as a cat, and able to bear any amount of fatigue…. His personal appearance was impressive but without the slightest suggestion of the pompous and overdressed military man; he was plain as an old stick, and looked more like an honest country squire than the commander of a warlike expedition . . . He was essentially a man of action, and spoke but little, and to the point . . . He never used profanity and indulged in no equivocal language.