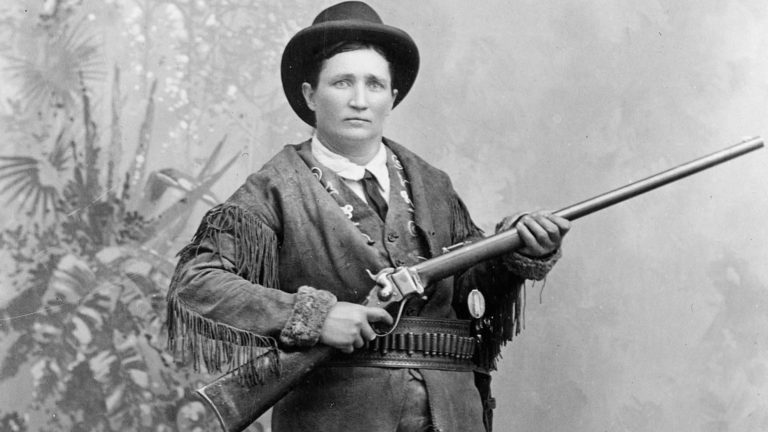 There are few women in Black Hills history quite as enigmatic as Calamity Jane. Stories of her exploits abound — many of which are her own invention. This makes it hard to decipher which parts of her story are true and what has been fabricated for entertainment.

Calamity Jane is believed to have been born in Princeton, Missouri on May 1, 1852. Her name at birth was Martha Jane Cannary, the eldest child of Robert and Charlotte Cannary. How many siblings she had is also up for debate, but there may have been as many as six. Jane’s parents were reputed to be unsavory characters known for committing petty crimes and often had no money. The family moved from Missouri to Montana in 1866. Calamity Jane learned to shoot and ride horses from going on hunts with the men in their wagon train.

When the Cannarys arrived in Montana, Charlotte Cannary died, most likely from pneumonia. The family moved on to Salt Lake City, but shortly after arriving Robert Cannary also died. Calamity Jane was now an orphan and head of the family at only 12 years old. With her younger siblings in tow, she headed to Wyoming and landed at Fort Bridger in May 1868. She took any job she could find to support her family, including as a cook, a nurse, and possibly a prostitute.

The next several years are when the actual story of Martha Jane Cannary and the persona portrayed by Calamity Jane begin to muddy the waters of history.

According to her autobiography, in 1870 she joined General George Armstrong Custer as a scout. She describes when he headed south to Arizona, and then returned to Wyoming in 1872. During this expedition with Custer she wore a man’s Army uniform. This was supposedly the beginning of her lifelong preference for men’s dress. The problem with this story is there is no record of her serving as a scout during this time, or of General Custer ever going to Arizona. She may actually have served as a scout under George Crook starting in 1872, who was in Arizona at the time.

We do know that by spring of 1876, Calamity Jane had arrived in Deadwood, South Dakota. By this point she was well known for her shooting, her brash mannerisms, and her drinking habits. She is often tied to her relationship with Wild Bill Hickok, but it seems in reality the two met only briefly. In fact, Wild Bill was murdered only months after her arrival in Deadwood. She called him her friend and would later claim to have married him in 1870. But by some stories, Wild Bill Hickok “would not so lower himself” to have any relations with her. There may never be a definitive answer to the truth of their relationship, but the legend continues.

The Deadwood event Calamity Jane had a hand in that holds the most weight in the history books may be the smallpox epidemic of 1878. The legend goes that while most people in the hills wouldn’t tend to the sick for fear of catching the disease themselves, She tended to many without a second thought. Some say she had recovered from the disease in childhood and was therefore immune, but it’s hard to say if that’s true or if she would have even known.

There are other stories of her nursing the sick back to health with no regard for her personal safety, such as a family in Pierre who were stricken by black diphtheria. She took on jobs as a nurse throughout her lifetime, so stories of her tending to the ill are not that far-fetched. Her calming presence during these calamities is one possibility for her nickname — and certainly the most honorable.

The rise of Deadwood Dick and Calamity Jane

After the death of Wild Bill, Calamity Jane continued to take odd jobs around the hills. She kept a roof over her head and paid off her substantial bar tabs.

Calamity Jane found a new source of fame and income with Edward Wheeler. He included her as a sidekick in several of his “Deadwood Dick” dime novels in the late 1870s. Wheeler had never met her, and most of his information was secondhand or fabricated. Nevertheless, his stories shone a new spotlight on Calamity Jane. He gave her a stage to tell her own tall tales of the Wild West. She published her autobiography in 1896 and presented it as a truthful telling of her life, but much of it has been disproven. During her lifetime, however, it solidified her as a star of the Wild West.

Riding the wave of celebrity she gained from these novels, Calamity Jane traveled the country as a performer. When she was out of work, she would sell pictures of herself to fans or copies of her biography. She joined up with Wild West shows, where she was a crowd pleaser. There is debate about if she actually joined with Buffalo Bill’s show in particular, however. Her show runs were short-lived, as she would drink all of her pay in short order and be kicked out for being too rowdy.

In 1903 she returned to the Black Hills with nothing but a ragged suitcase and raging alcoholism. She spent a couple months in Belle Fourche cooking and doing laundry at Madam Dora DuFran’s brothel. By summer, she was dying from alcoholism, and on August 2 was found in a room at the Calloway Hotel.

She was buried next to Wild Bill Hickok, and even this last act in her story is shrouded in uncertainty. The most popular story is she requested to be buried next to him because they were friends or lovers. Some say it happened as a joke on Wild Bill. In life he had reportedly found her a bit annoying, and his friends supposedly thought it could be fun for her to annoy him in the afterlife as well. Perhaps the most likely is local residents buried Calamity Jane next to Wild Bill as an early tourist attraction. Rumors of their involvement persisted even then.

It’s hard to separate fact from fiction in much of Jane’s story.

She earned her place in history by being a brash, outlandish figure in the history of the Wild West. Much of her fame comes from her exaggerated exploits, but she was also a caring soul who nursed several Deadwood residents back to health during the smallpox outbreak of 1878. When journalist Thomas Newson met her, he said she was “generous, forgiving, kind-hearted, sociable, and yet when aroused, has all the daring and courage of the lion or devil himself.”

What we do know, even without separating fact from fiction, is Calamity Jane lived her life free of societal expectations, and her style of rough and tumble nonconformity embodied the spirit of the Wild West.