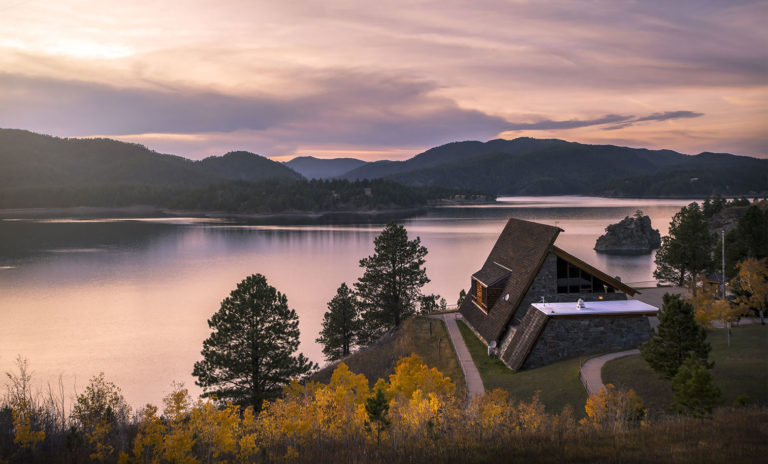 Under Pactola Lake, there are the eerie submerged remnants of the mining boom town that called the valley home before it vanished under the water.

Pactola is likely the least accessible ghost town in the Black Hills. The few remnants of this old town are now under Pactola Lake, as the area was turned into a lake by the Pactola Dam. Before the damming process began, many homes were moved to nearby towns like Silver City. Contrary to local legends, the only underwater reminders of the once booming town of Pactola are some remaining foundations and a Civilian Conservation Corp dynamite bunker. An early Pactola cabin escaped being caught up in the damming, and it still remains downstream and above water.

Around 1875, the gold rush to the Black Hills drew a number of illegal settlers to the area. The Black Hills had been promised to the Lakota people with the 1851 Treaty of Fort Laramie, so for a short time, the military worked to remove the prospectors. In 1875, General George Crook and his cavalry settled the land that would become Pactola and called it Camp Crook. Camp Crook was his calvary’s base as they worked to remove nearby prospectors from Lakota treaty land.

The military soon gave up in face of an overwhelming number of prospectors, and the Lakota’s promised Black Hills became open to settlement. Prospectors settled in former Camp Crook after gold was discovered in the creek beds. By late 1876, about 300 miners called it home, and a store opened the same year. In 1877, one of the first post offices in the Black Hills was established. The Black Hills & Western Railroad laid tracks to Camp Crook and a hotel opened. Business was booming!

Residents agreed that a name change was in order, and a town meeting was called. A lawyer who had recently moved into town was feeling tipsy after too many drinks, and he gave a rousing speech that the name should be changed to Pactola. He recited the legend of King Midas, whose touch turned everything to gold. Gold was being prospected from the river, so he proposed it be called Pactola, for the Pactolus river, whose gold sands were believed to be the source of wealth of Croesus. The inspired town agreed and Pactola was born!

In the later decades, a Civilian Conservation Corps camp, church camps, a facility for tuberculosis patients, lodges homes, and stores were constructed. Despite the new buildings, it became largely abandoned due to dwindling mining profits.

It was decided that a dam would be constructed at the site of Pactola, and buildings were either moved by the owner or auctioned off and moved. The Pactola Dam was constructed from 1952 to 1956 to control flood conditions and provide water to Rapid City as part of the Flood Control Act of 1944.

Today, little evidence remains of the once booming mine town of Pactola. Pactola Lake is now a popular recreation area for fishing, boating, swimming, and hiking.