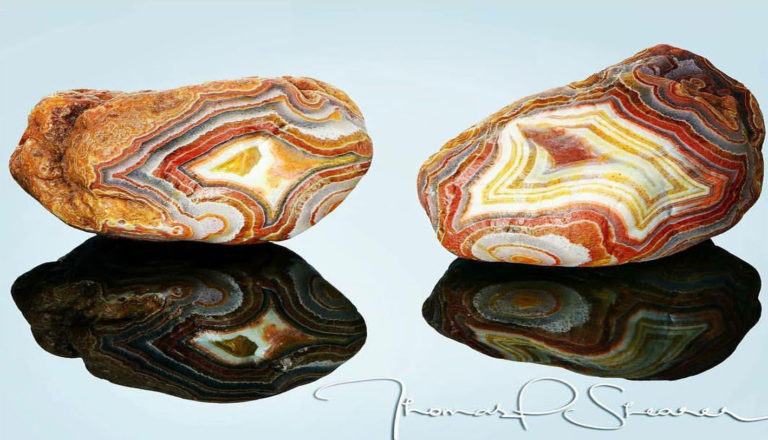 Rock hounds scour the southern Black Hills in search of an elusive, yet beautiful rock: the Fairburn Agate. Finding a large fairburn is not only a once-in-a-lifetime treasure, but also will cash in a big paycheck for the lucky rock hound!

These agates are named after Fairburn, the town where the most famous agate bed is located. Fairburn is tiny town with less than 100 people 30 miles south of Rapid City. The agate bed is 12 miles east of the town.

“Most people know about the agate beds east of fairburn but you can actually find a fairburn agate starting south of Rapid city a few miles clear down into the Nebraska grasslands. They are typically east of Highway 79 and can be found pretty much all the way to the Badlands. Anywhere in the grasslands where there is an outcropping of rock is worth checking out,” advised Shawn Kuhnel, owner of The Rock Shed in Keystone.

For those who aren’t into hiking, these unique agates can be found at the many local rock shops. Shawn reported that he has 50 to 100 fairburn agates at any given time. Tourists often come in just to see the fairburns, but don’t usually purchase because of the high price. Other local rock shops include Indigo Iris Rocks and Stones in Rapid City, Dave’s Rock Shop in Custer, and Dakota Stone Rock Shop in Hill City.

The Hermosa Fairburn Agate Swap is held annually in late summer, where enthusiasts come from across the Midwest to swap rocks and stories from their hunts. Crowds come to admire the rocks and look at vendors.

Why do so many people flock to South Dakota to search for these rocks?

First and foremost, they are fascinating to look at, with many rings and can be in a variety of colors. Reds, blacks, and whites are most highly sought after, but they can be orange too.

“Collectors say there are greens,” explained Shawn. “When they say green, it is almost a stretch of the imagination, but there is some green there.”

The possibility of a payday is another draw, as large fairburns are incredibly rare and can fetch a pretty penny. Shawn explained that a full-banded 2-inch to 4-inch agate are “once in a lifetime finds.”

“Once you start hunting for these, it is hard to stop. Most people never find one,” he ended.

Behind the Hiking Boots

Gregory Martinez from Rapid City describes himself as a normal guy living a normal life. But in his free time, this salesman searches for remote, untouched rock beds in hopes of finding a fairburn. While Gregory is careful, heading into the wilderness often comes with risks. Sometimes he comes back with no fairburns and only a good story!

On one occasion, he and a cousin decided to raft downstream from a bridge on the Cheyenne River in Red Shirt. But neither realized the water level would be so low. In the hot August weather with no cell phone service, they struggled to even maneuver their raft.

The horseflies were so bad that I had to beat tons of them off my cousin’s his back with an oar, while he was flailing his arms around trying to chase them off. We drug the raft through countless sand bars that day and quickly realized it would have been faster to walk,” remembered Gregory. “By sunset we weren’t even close to the second vehicle we had dropped off at three that morning. We pulled out of the river and began to drag our supplies to the top of a hill. We were able to get enough service to make a phone call and be rescued. We only found one fairburn chip smaller than a dime.”

Another time, he and a friend were hiking on a grassland near Scenic, and ran into some huge trouble.

“We did not realize that they released buffalo in that area. We were at least an hour hike in and we crested a hill only to be face to face to a full grown bull buffalo. Naturally both the buffalo and us were startled, and we both ran away from each other. The area was full of steep hills which helped us get away. As I was running through a rock bed, I happened to look down and found a beautiful black and pink fairburn agate sitting face up. I called it my Spirit Buffalo Rock for I would not have found it if it weren’t for the buffalo—but needless to say, too close for comfort.”