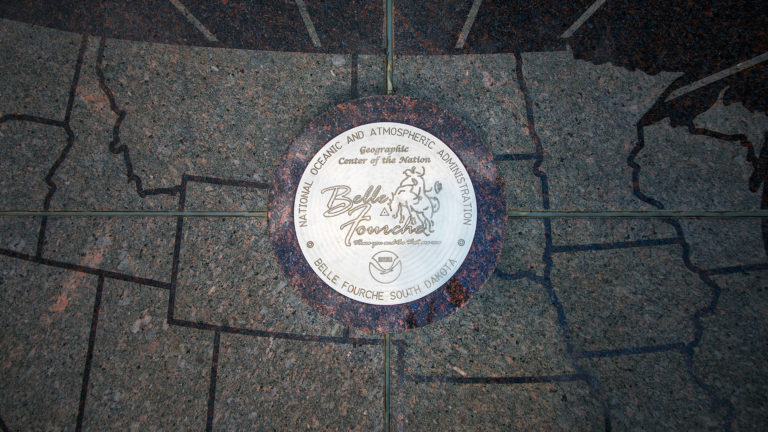 Defined as “the Beautiful Forks” in French, the namesake and town site of the city of Belle Fourche (pronounced “Bell Foosh”) was the confluence of the Belle Fourche and Redwater Rivers in southern Butte County. As with other western communities, Belle Fourche is a city that nearly did not come to be—due to politics and railroad construction.

In 1890, the established Butte County community of Minnesela was awaiting the arrival of the Fremont, Elkhorn and Missouri Valley Railroad. As the rails were pushed northward from Whitewood, Minnesela expected to be on the railroad line, and prepared to sell the railroad enough land for its depot and yard. Pioneer Black Hills sheriff and rancher Seth Bullock owned land near the early-day stage station of DeMores, located three miles northwest of Minnesela. He and others persuaded the railroad to build across his ranch at no charge, and helped to develop a new terminal at DeMores. The new town located at the beautiful forks of the river was created with the arrival of the Elkhorn Railroad in 1890. Belle Fourche soon took over as the seat of Butte County government, and Minnesela faded into history as nearly all of its residents moved over to the new town.

Belle Fourche grew quickly. The first church service was held on the platform of the railroad depot, with planks placed on top of beer kegs for seating. In early 1891(and still hitting the newsstands today), one of the state’s longest-continuously published newspapers was introduced—the Belle Fourche Bee.

But first and foremost, Belle was a cow town. In 1893, more range cattle were shipped out by rail than at any other railhead—a record 4,700 carloads.

Population increased in the early 1900s as the Orman Dam and Irrigation project brought a great deal of prosperity to the area. With the addition of irrigation to the Belle Fourche Valley, sugar beet production and other agricultural commodities gave the region a very large boost.

Belle Fourche is probably best known for its annual Black Hills Roundup Rodeo, established in 1918 as a benefit for the American Red Cross during WWI. Many famous cowboys and rough stock have called on Belle Fourche over the Fourth of July weekend each year in order to compete in one of the premier professional rodeos in America.

The addition of Alaska and Hawaii to the Union in 1959 moved the geographic center of the United States to a point approximately 30 miles north of Belle Fourche. Since then, Belle is often referred to as “the center of the Nation.” The city still serves a large trade area in the four-state region. Major businesses include cattle ranching and sales, the sale and processing of sheep’s wool, and the mining, milling, and transport of bentonite—a clay used in thousands of products and processes around the world.