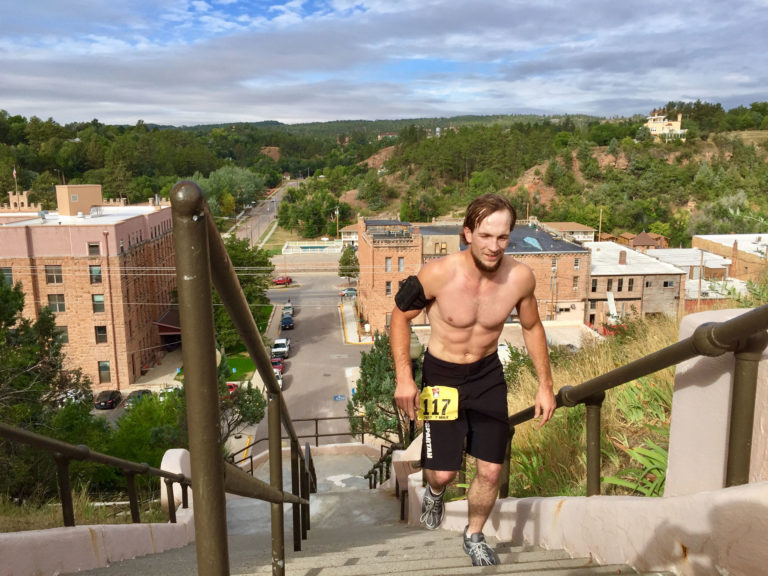 Climb Your Way to a Hidden Gem in the Black Hills

“You look at Hot Springs and you’d never say it’s flat,” says local resident Colter Steinmetz of his hometown. “One of the things the town is known for is the stairs—they’re built into the town.”

In 2016, based on a suggestion from a town member, the Hot Springs Rotary Club decided to put those stairs to good use, sponsoring an outdoor stair-climbing event that incorporates five historic flights of stairs–657 steps in total–into a seven mile race that offers picturesque views of the Black Hills and the local river walk, tests runners’ every muscle group, and crisscrosses the tourist-centric town. There’s also a shorter three-mile route that includes two sets of stairs.

“We’re trying to shed light onto our small town and the Black Hills,” says race director Curt Lout. “I think the route is beautiful with the sandstone buildings and the river and the historic steps. I think it’s a really fun destination event for people to come here for a weekend.”

Pairing a running portion with a series of outdoor stair climbs, the Climb Hot Springs race is one of only two of its kind in the nation–with the Bisbee 1000 The Great Stair Climb in Arizona being the other. And though it’s only been around for a few years it’s already picking up steam. Lout says the race brought in runners from seven different states in 2017. “We’re trying to promote this as a national event to bring people in to enjoy our little town and the hospitality,” says Lout. “The idea of bringing people in from outside is slowly working.”

Aside from the unique course and the small-town charm, the race also offers stylish t-shirts (designed by Lout), a post-race meal (with beer included) and truly impressive awards (the male and female winners take home colorful glass sculptures).

2017 race winner Josh Duncan–who came in from Chicago and placed second in 2016’s race–says he’ll be back. “I love running and I love stair-climbing,” he says. “I had no idea what the town was going to look like when when I got here, but I kind of had to put one hand under my chin to hold it up because I absolutely loved it.” His favorite part of the course is the creek that runs through town. “That’s one of the best parts of the race,” he says. “It also happens to coincide with the flat part of the course so that’s nice for us from the Midwest.”

Fall River-which winds through town and stays at a constant 87 degrees throughout the year–is only one of the natural vistas on display on the race course. From the top of each set of stairs runners and walkers get panoramic views of the surrounding areas as well as the many historic buildings that populate Hot Springs, including the Battle Mountain Sanitarium (currently a VA Medical Center).

With numerous hotels and bed and breakfasts to provide lodging, nearby natural attractions like Wind Cave National Park and Mammoth Site a short drive away, plenty of art shops and local restaurants lining the main drag in downtown, and the one-of-a-kind Evans Plunge Mineral Springs (an indoor natural mineral water pool) for playing and race recovery, Climb Hot Springs serves as an ideal excuse to make a trip to this hidden South Dakota gem for a relaxing vacation weekend (after you’ve climbed all 657 steps that is).