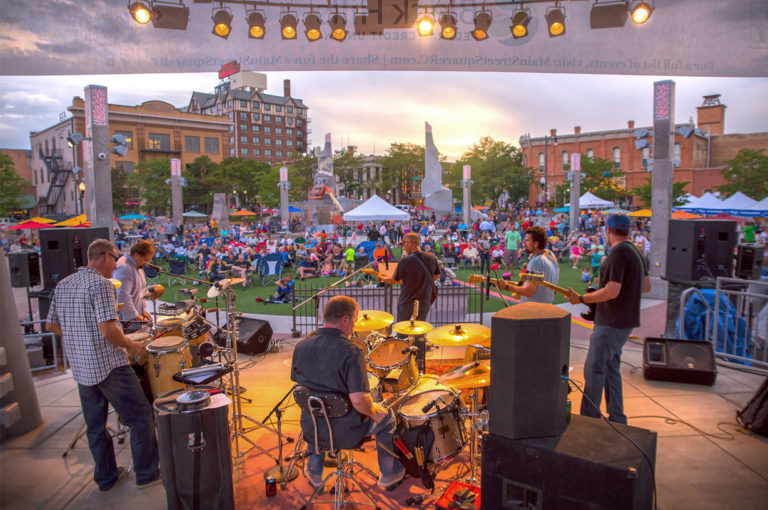 The Story of Rapid City

The 1874 discovery of gold in the Black Hills brought droves of settlers to the region, each hoping to strike it rich. Not everybody was lucky; one group of down-on-their-luck prospectors looking for other opportunities saw potential in a large river valley situated between the Black Hills to the west and the plains to the east. Its central location made it a good place to sell supplies to the area’s miners and homesteaders. This group of 11 men, led by John Brennan and Samuel Scott, set up camp on the banks of Rapid Creek, the site of present-day Founders Park. They laid out a one-square-mile business district and named their settlement Hay Camp, eventually renaming it Rapid City after the creek running through it. After six months, Rapid City’s population numbered a little over 100.

The city’s prime location made it a convenient transportation hub, initially for wagons and stagecoaches, and then rail traffic following the completion of the Fremont, Elkhorn and Missouri Valley Railroad in 1886. The city’s founders advertised their community as the “Gateway to the Black Hills,” a nickname still in use today. Like many new settlements, Rapid City’s fortunes waxed and waned over its first few decades, but it steadily grew into a major regional trade center supporting the upper Midwest. Ranching and other agricultural businesses were the primary industries.

The invention of the automobile had a profound effect in shaping Rapid City’s future. Already popular with tourists drawn to the region’s natural beauty, the Black Hills got another boost when local leaders began promoting automobile tourism. A network of roads and highways were built to accommodate the growing popularity of the automobile, and when sculptor Gutzon Borglum began working on a monument to American presidents at Mount Rushmore in 1927, the number of visitors skyrocketed. The memorial opened to the public in 1941.

The budding tourism industry took a hit during the Great Depression and World War II, but the establishment of Rapid City Army Air Base (later renamed Ellsworth Air Force Base) six miles northeast of the city in 1942 helped stave off economic disaster. With an influx of military personnel and their families, Rapid City’s population rose from 14,000 in 1940 to 27,000 in 1948. Designated as a training facility during the war, Ellsworth AFB continued to play a crucial defense role as tensions escalated in the Cold War standoff between the U.S. and Soviet Union, benefiting Rapid City’s economy.

Rampant construction took place during the 1950s as Rapid City positioned itself as a regional retail and wholesale trade center. City officials formulated a growth plan and began developing the infrastructure by building new schools, paving streets, and adding more parking downtown. The construction boom slowed in the 1960s, but was revived after the devastating flash flood in 1972 that claimed 238 lives and caused $165 million in property damage—an event that remains the worst natural disaster in South Dakota history. The city seized the opportunity to create a green space along Rapid Creek and invested heavily in rebuilding, adding new homes and businesses, including the long-planned Rushmore Plaza Civic Center and Rushmore Mall.

Today, Rapid City is a diverse community with a promising future. Growth and economic development are top priorities; in 2011, a parking lot was razed to create Main Street Square, the city’s unofficial “living room” and host to a number of year-round events. Rapid City remains a popular destination for tourists eager to visit the Black Hills or check out the local sights, such as the City of Presidents statues.

For more information on attractions and events in Rapid City, visit us here.