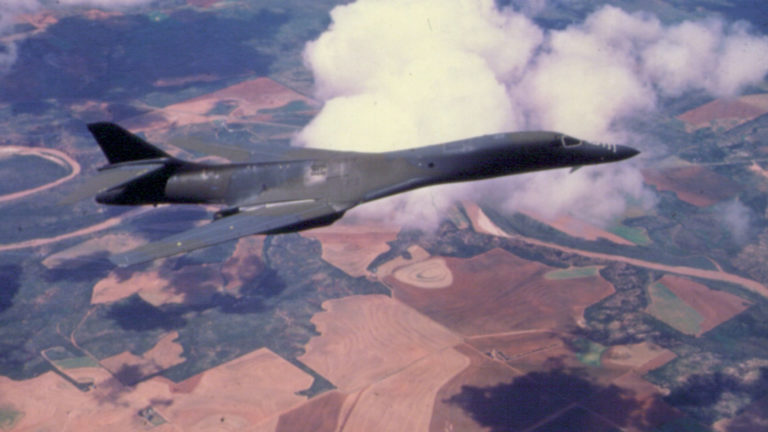 The Story of Ellsworth Air Force Base

The military presence in western South Dakota dates back to 1942, when Rapid City Army Air Base (AAB) was established on the site of the former municipal airport. The U.S. War Department designated the base as a training location for the B-17 Flying Fortress, a heavy bomber that was seeing extensive action in the European theater during World War II. Construction began in January, mere weeks after the attack on Pearl Harbor; the control tower, runways, offices, and other facilities were all complete by October 1—a torrid pace necessitated by the conflict overseas as the U.S. and Allied forces battled the Axis powers. Five hangars were finished before the end of the year.

Colonel Charles Oldfield was named the first base commander; as the war raged on, thousands of pilots, gunners, navigators, and radio operators received training at Rapid City AAB. In all, personnel from nine heavy bombardment groups and many smaller units attended the base’s Combat Crew Training School.

Once the war ended, activity wound down. Rapid City AAB was placed on standby status in July 1945 during the demobilization of the Army Air Forces, but was reactivated three months later and used as a training center for weather reconnaissance and combat squadrons. When those missions ended, the base was closed down from September 1946 until March 1947 for modifications that were needed to prepare it for its next role as the primary unit for the 28th Bombardment Wing and the B-29 Superfortress. The base was originally conceived as a temporary facility, but when escalating tensions between the United States and the U.S.S.R. gave rise to the Cold War, the air base was deemed essential in defending against nuclear attack and was declared a permanent installation in 1948. That year, Rapid City AAB was briefly renamed Weaver Air Force Base in honor of Brig. Gen. Walter Weaver, a career Army officer instrumental in the creation of the Air Force, but public outcry convinced the Secretary of the Air Force to revert to its original name.

Runway improvements in 1949 made Rapid City AAB capable of accommodating the B-36 Peacemaker, a massive bomber with nuclear capabilities. A large hangar—known today as the Pride Hangar—was built to house the B-36, and in 1950, the base was reassigned from the 15th Air Force to the 8th Air Force.

Following the crash over Newfoundland of an RB-36 returning to the base in 1953 after a simulated combat mission, President Dwight D. Eisenhower visited Rapid City AAB on June 13 and renamed it Ellsworth Air Force Base in honor of the flight’s commander, Brig. Gen. Richard Ellsworth, who perished along with 22 crew members.

In 1955, Ellsworth AFB was reassigned back to the 15th Air Force in anticipation of a switch from the B-36 to the newer B-52 Stratofortress, a long-range strategic bomber that would play an integral role in the defense of U.S. airspace. In 1958, the 821st Strategic Aerospace Division was activated, taking command of all base units.

As tensions with the Soviet Union worsened, Ellsworth AFB saw the arrival of the first intercontinental ballistic missile, the Titan I, in 1962, but it was quickly rendered obsolete by the Minuteman I ICBM. Ellsworth’s facilities were upgraded to accommodate this new missile, as well as its follow-up, the Minuteman II, which made its debut in the early 1970s. The base continued to play a key role in first strike defense throughout the Cold War, with the 44th Strategic Missile Wing responsible for almost 150 Minuteman II ICBMs strategically positioned in western South Dakota during the height of the nuclear threat.

The B-52s were retired in the mid-1980s as the Air Force transitioned to the B-1B Lancer bomber. When the Cold War finally came to an end, the diminished threat led to a reduction in operations at Ellsworth AFB. Units were ordered to “stand down” for the first time in September 1991, and the extensive missile silo network was deactivated as the base’s role shifted from strategic bombardment to tactical training. The last ICBMs were removed in April 1994. The future of Ellsworth AFB fell into jeopardy in May 2005 when the Department of Defense added it to their list of recommended base closures as part of their Base Realignment and Closure (BRAC) process, an effort to shutter nonessential installations to save costs. South Dakota Senator John Thune fought against the closure, the South Dakota Ellsworth Development Authority was created, and in August 2005 the BRAC commission voted 8-1 to spare Ellsworth.

Today, Ellsworth AFB ranks among the top Air Force bases in the country. In March 2019, Ellsworth was chosen as the preferred location for housing the first operational B-21 Raider stealth bomber unit, as well as the first formal training unit, a testament to its ongoing importance in long-term strategic Air Force planning. The first B-21s are expected to arrive in the mid-2020s and promise to provide a strong boost to the local economy.

For more information on attractions and events in and around Ellsworth AFB, visit us here.