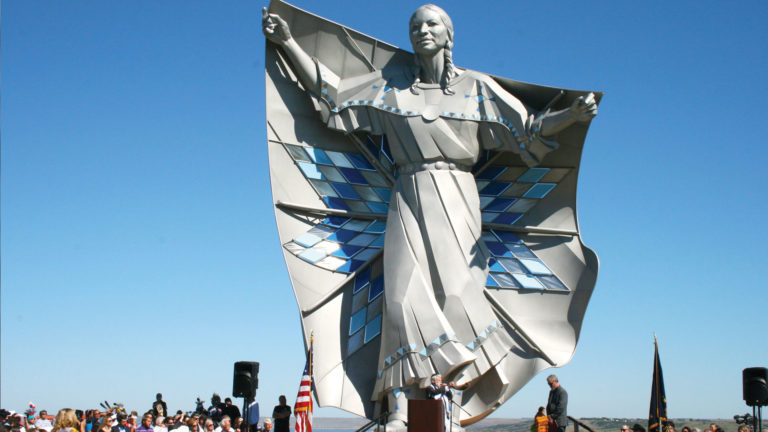 They Call Her Dignity

Overlooking the Missouri River in Chamberlain is the striking 50-foot tall Dignity Statue. The stainless steel statue is of a young Native American woman with a star quilt draped around her shoulders. At night, it is lit up with LED lights, so it is always visible to motorists along Interstate 90.

The star quilt on the statue is made up of more than 100 blue diamond shapes that move in the wind.

The Dignity Statue was created by South Dakota artist Dale Lamphere to honor Native American culture. In 2014, Norm and Eunabel McKie of Rapid City commissioned the statue as a gift to all of South Dakota to celebrate 125 years of statehood.

“This sculpture will be lit at night, and just as Mount Rushmore and Crazy Horse have become iconic images in the mind of our visitors, I believe Dignity will become one as well,” said Governor Dennis Daugaard in his “State of the State Address” in January 2016.

It was installed in 2016 but has already increased tourism for the small town of Chamberlain.