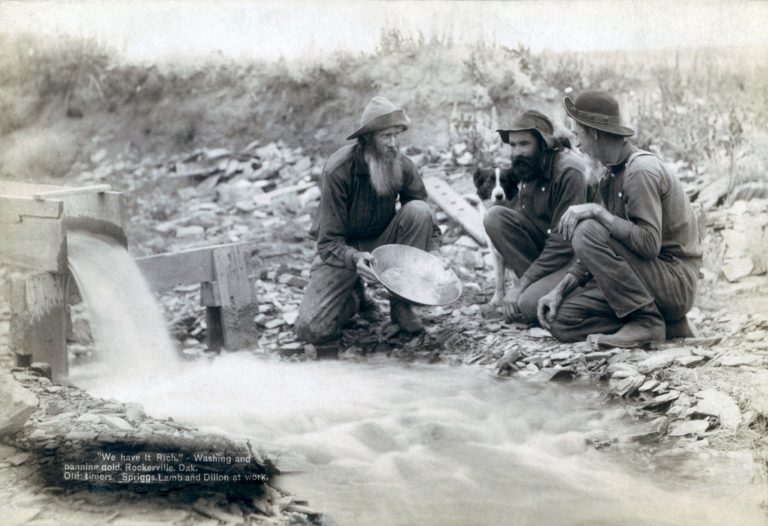 The Black Hills Gold Rush began in 1874, when Lieutenant Colonel George Armstrong Custer led a group of over 1,000 men from Fort Abraham Lincoln in the Dakota Territory (present-day Bismarck, North Dakota) to the Black Hills. There had long been rumors of gold, but the Treaty of Fort Laramie had granted the Sioux Indians ownership of their sacred land, stymying earlier exploration of the area. Custer and his 7th Cavalry were tasked with finding a suitable location for an Army fort and investigating the area’s natural resources to see if the rumors were true.

They were, indeed. Gold was discovered in French Creek, just outside of the town that would eventually be named after Custer. This prompted a dispatch announcing the discovery and declaring, “There is no doubt as to the existence of various metals throughout the hills…examinations at numerous points confirm and strengthen the fact of the existence of gold in the Black Hills.” The news was carried by courier to Fort Laramie, Wyoming, and telegraphed to the press. Just like that, the Black Hills Gold Rush was on.

Despite the treaty prohibiting white settlement, prospectors descended upon the southern hills in pursuit of riches. Slim pickings prompted them to branch out to the northern hills, and their fortunes took a turn when significant amounts of gold were found in Deadwood Gulch, named for the many dead trees that littered the canyon. This was placer gold, loose pieces mixed in with rock and dirt in Deadwood and Whitewood Creeks. Knowing that placer gold had to have a source, prospectors eyed the quartz and rock outcroppings around the mining camps. On April 9, 1876, brothers Fred and Moses Manuel, along with Hank Harney and Alex Engh, discovered a sizeable vein of gold-bearing ore near present-day Lead. This turned out to be the veritable mother lode deposit feeding the placer gold in the creeks. They staked a claim and named it the Homestake Mine, selling it to a group of out-of-state investors, including George Hearst, the following year for $70,000. They had no way of knowing their discovery would end up being the most significant gold vein in American history, supplying 10 percent of the world’s supply of gold over the next 125 years and yielding over 40 million ounces of gold valued at more than $1 billion dollars.

Other prospectors hoped to find the next Homestake, but that mine proved unique. Its gold was free-milling, meaning the quartz merely had to be crushed to release its treasure, whereas most of the other gold in the region was chemically bound to the rock, making it difficult and costly to remove. By 1880, the richest placer deposits had been depleted, and attention turned to hard rock mining. Few operations were profitable and most closed quickly. Not helping matters was the government-fixed price of $20.67 per ounce of gold, a value that did not change for years even as the price of labor and supplies escalated. Only the mighty Homestake survived and prospered, eventually closing down in 2002 due to rising production costs.

The Black Hills Gold Rush was heady and exciting. It made a few men wealthy, but most departed with little to show for their hard work. Its spirit lives on to this day; you’ll still spot the occasional panner working the streams for small flecks of gold, inspired by the same fever that drove thousands of men to the Black Hills more than a century ago.