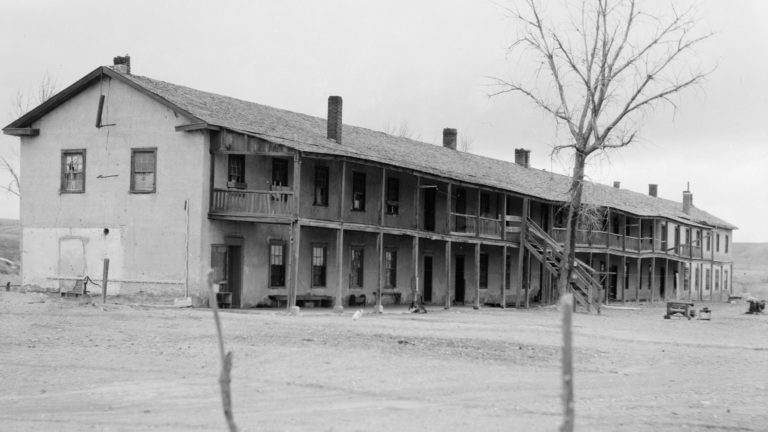 Fort Laramie and the Black Hills

The confluence of the Laramie and North Platte Rivers (in current-day southeastern Wyoming) was pivotal in the history of the American West. It is safe to say that a war began there, peace was made there, and the destinies of countless men and women were determined by events at the location now known as Fort Laramie.

Trappers of the American Fur Company were the first non-natives to explore the North Platte River country. On December 22, 1812, expedition leader Robert Stuart noted in his journal that “a well wooded stream apparently of considerable magnitude came in from the South West.” He also made mention of wild horses, buffalo, and antelope. The Stuart party of Astorians is credited with discovering the Platte River route and South Pass—later used by thousands of settlers as a natural gateway to Utah, Oregon, and California.

The origin of the name of the river, the mountain, and later of the fort and city is attributed to the killing of trapper Jacque Laramee by Arapahoe Indians near the present site of Fort Laramie in 1821. Where the rivers converged came to be a favored point for trading between trappers and members of the regional Cheyenne, Sioux, and Arapaho.

Traders William Sublette and Robert Campbell established Fort William, a log-stockade for trading with local Indians in 1834. The American Fur Company bought the Fort in 1836, and replaced it in 1841 with a new adobe structure named Fort John, one of America’s most recognized locations in early westward expansion.

The first emigrants to go past the Fort in a covered wagon were missionaries Marcus and Narcissa Whitman (1836). The big push of western migration did not start until 1843, when about a thousand pioneers made the journey (approximately 500,000 settlers would pass on their way west in the following twenty-five years).

Some noteworthy events at the Fort in the first decade were:

1842   Lieutenant John C. Fremont passes on his first exploratory trip to the Rockies.

1843   The Cow Column—this movement represented the first of the wagon trains to Oregon.

1845   Colonel Stephen W. Kearny councils with the Indians to insure safe passage for the growing tide of emigrants traveling along the trail, the first peace council at Fort Laramie.

1846   The Donner Party passes on their fateful trip to the West.

1847   Brigham Young leads the first of the Mormon emigrants through in search of their Zion, the valley of the Great Salt Lake.

The Establishment of Fort Laramie

By the late 1840s wagon trains bound for Oregon, California and Utah rested and re-supplied at Fort John, now a strategic trading and rendezvous point for overlanders, traders, soldiers, and Native Americans. This fact was not lost on the government of the United States who purchased the compound for $4,000 in June of 1849 and renamed it Fort Laramie.

The first garrison at the Fort comprised of two companies of mounted riflemen and one company of the sixth Infantry. Troops protected travelers (nearly 50,000 in 1850 alone) on the Oregon Trail from the Native Americans in the region. Various tribes and travelers along the Oregon Trail had coexisted with few problems up to this point, but the number of violent incidents escalated with the increased number of overland travelers. The Treaty of 1851(Horse Creek Treaty), a poorly-worded pact designed to keep the increasing flow of settlers protected from “hostiles” by providing the surrounding tribes with trade goods and rations, was signed between the United States and the prominent tribes of the Plains Indians at Fort Laramie.