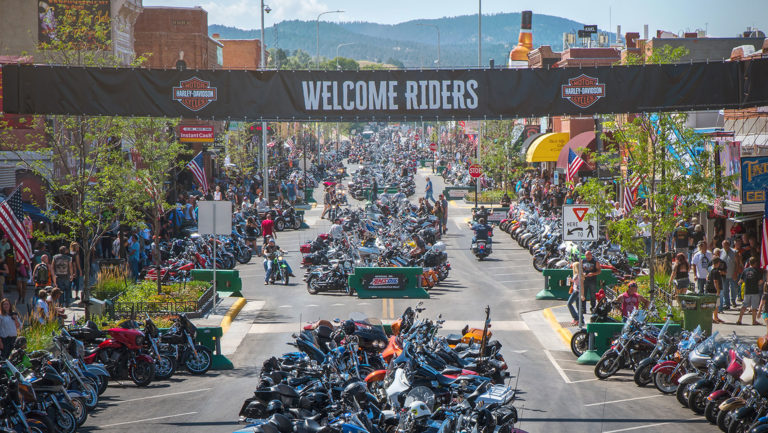 From Motor Classic to Rally: Sturgis Then & Now

Every August, a persistent rumbling noise fills the air around the Black Hills. It isn’t Mother Nature, but rather, the roar of thousands of two-piston engines as motorcyclists from across the country descend upon the area for the annual Sturgis Motorcycle Rally. The event attracts around 500,000 visitors every year, often spiking around key anniversaries (the 75th Rally, in 2015, drew a record-high crowd of 739,000), and brings an estimated $800 million in revenue. But it wasn’t always the big deal it is today.

The inaugural event, dubbed the Black Hills Motor Classic, was held on August 14, 1938. It was the brainchild of Clarence “Pappy” Hoel, owner of an Indian Motorcycle Shop in Sturgis and a member of the Jackpine Gypsies Motorcycle Club. His desire was to entertain visitors with motorcycle stunts and races. Pappy’s wife, Pearl, organized a Gypsy Tour ride through Custer State Park that included a picnic lunch at the State Game Lodge. That year, nine riders raced their motorcycles through Sturgis, attracting a humble crowd of 175. A parade, street carnival, and community dance were part of the festivities. Attendees even got to witness stunts, with Pappy himself crashing his bike through a wall of burning pine boards. Turnout might not sound impressive by today’s standards, but the event was enough of a success to convince Pappy to keep the Classic going.

Gas rationing for World War II forced the event’s cancellation in 1942 and 1943, but it returned the following year and has been a fixture ever since. As attendance grew, the event began to evolve. In 1949, organizers closed Main Street in Sturgis for the first time, to accommodate an awards ceremony; a few years later, they began closing it off for designated motorcycle parking—just one block initially, but nowadays, Main Street is closed from Middle to 5th Streets, six entire blocks.

1961 saw the introduction of the Hill Climb and Motocross races, popular events that became mainstays. The Classic expanded to three days in 1963 and five days in 1965, its 25th anniversary. Attendance that year reached 2,500—a new all-time high.

The event took on a new direction in 1974, when the first temporary vendor was allowed at the Sturgis Auditorium—a modest beginning to what has evolved into hundreds of vendors hawking everything from t-shirts and corn dogs to high-end custom bikes. For its 35th anniversary in 1975, the Classic expanded to seven days as crowds continued to flock to Sturgis. Things occasionally got rowdy, with public nudity, drunkenness, gunfire, and altercations between rival motorcycle gangs keeping local law enforcement officials busy. By the early 1980s, the event’s future was uncertain; a citywide referendum to end the Classic was put to a vote in 1981 and was defeated by the narrowest of margins—just 1 percent!

Camping has been a tradition ever since the event’s inception. That first year, attendees pitched tents in Pappy’s backyard. Eventually they spilled into Sturgis City Park, which was closed to camping in 1983 after attendees set a number of bonfires. Today’s campers have a wide range of options in and around Sturgis, the largest being the Buffalo Chip Campground – a virtual community, complete with convenience store, bars, and multiple concert stages. In fact, Buffalo Chip filed for incorporation as a town in 2016, but its status is in limbo due to legal challenges.

The Black Hills Classic’s 50th anniversary in 1990—just a year after Pappy’s death—marked a new turning point. Attendance hit 400,000, and it officially became South Dakota’s largest tourist event. The following year, it was renamed the Sturgis Rally and Races (attendees had been referring to it as simply “Sturgis” for decades). The Rally continued to gain popularity throughout the 1990s, reaching 150,000 in 1993. An estimated 600,000 visitors turned out for the 60th anniversary in 2000. By 2012, annual attendance had quadrupled from the ’90s, averaging 500,000 people—a number that remains consistent to this day.

Nowadays, the Sturgis Rally is widely recognized as the nation’s premier motorcycle festival. Its rowdiest days are long past as bikers grow older and corporate sponsorships turn a former free-for-all into an organized 10-day event. It’s larger in scope than ever, drawing top-name musical acts from around the country for a slate of nightly concerts, and includes new events like a military appreciation day and the Wild Gypsy Tour Festival, an all-women’s motorcycle festival and campout. The Rally attracts an increasing number of non-riders, as well. This might have to do with the fact that today’s Harley-Davidsons are considerably more expensive than they were in the old days!

A lot has changed over the years, but as Sturgis prepares for the 81st anniversary of the Rally in 2021, one thing is certain: the event is more popular than ever!