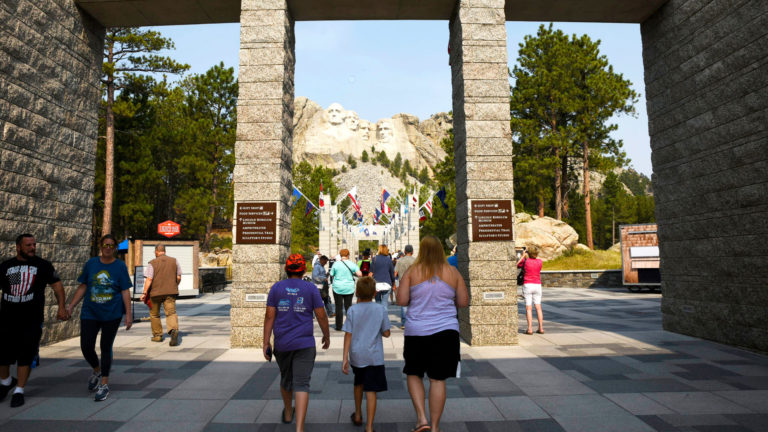 The sculpture of four famous American presidents (Washington, Jefferson, Lincoln, and Theodore Roosevelt) draws millions of visitors to this National Monument each year.

A sculpture in the Black Hills was originally envisioned by two South Dakota natives, Doane Robinson and Peter Norbeck. The two tourism promoters and others first lobbied to have sculptures of Old West heroes carved in the granite spires of the Needles area.

In 1925 they sought the help of the famous sculptor, Gutzon Borglum, who had been working on a confederate memorial on Stone Mountain in Georgia. Once convinced, Borglum moved to the Black Hills. Realizing the possibilities of the idea, Borglum immediately began to formulate plans for the daunting project. Borglum and local guides located a southerly-facing body of granite (for proper illumination by the sun) suitable for carving near Keystone known as Rushmore Mountain. Rather than Western heroes, Borglum felt that four presidents who influenced the American West would be more appropriate for the carving. A formal dedication for the project was held at the mountain on October 1, 1925.

On August 10, 1927, President Calvin Coolidge again dedicated the project, and for the next fourteen years work continued on Mt. Rushmore. Of those fourteen years, only six and one half years of actual work occurred due to weather and monetary shortfalls.

Borglum died of a heart attack in March of 1941, and the project was turned over to his son Lincoln for completion. With a lack of suitable granite on the mountain for further extensive work on all of the bodies of the figures, Lincoln finished the project six months later. The completed project is as viewed today.

The Memorial has a 2,500 seat amphitheater, interpretive center and theaters, scenic hiking trail, restaurant, gift shop, and bookstore. Admission is free, but there is a small parking cost.

More information on the carving of the mountain, and its enduring legacy can be seen at the Visitor’s Center, other areas at the Memorial, and at National Park Service – Mt. Rushmore.