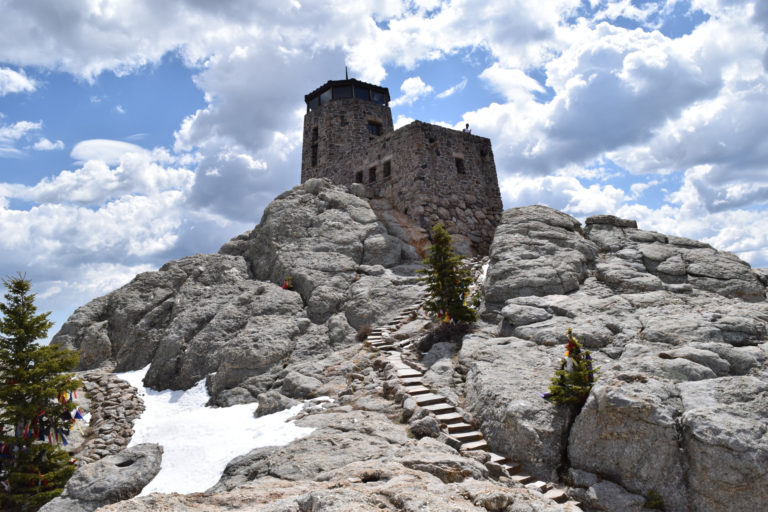 If your time in the Black Hills is limited and you can only do one hike (perish the thought!), Black Elk Peak should be your go-to. It’s probably the most rewarding of all the hikes in the region (and definitely the most popular). There is so much to recommend about Black Elk Peak: jaw-dropping vistas, an historic fire lookout tower, acres of ponderosa pine forests, gently babbling brooks, and a wide variety of vegetation, including vibrant wildflowers and wild raspberries (in season, of course). At 7,242 feet in elevation, the summit ranks as the highest point east of the Rocky Mountains and west of the Pyrenees in France.

Up until 2016, the mountain was known as Harney Peak, but was renamed in honor of Black Elk, an Oglala Sioux medicine man and spiritual leader who received a “great vision” during a trek to the summit at the age of nine. The area had long been considered sacred to the Lakota Sioux, and the decision to rename the popular peak was applauded by Native Americans, who felt General William Harney’s military exploits against the Sioux weren’t deserving of honor.

Lieutenant Colonel George Armstrong Custer led a team of men to the summit during the 1874 Black Hills Expedition, making them the first Americans to reach the peak. People have been making their way to the top pretty much ever since.

There are multiple ways to reach the summit of Black Elk Peak—more than a dozen trailheads in all, many connecting from other hikes via spurs—but most people set out from Trail Number 9 at Sylvan Lake. From here, it’s 3.5 miles to the summit, with an 1,100-foot elevation gain. The ascent never feels especially steep, until perhaps the last half-mile or so, but you’ll be so overwhelmed by the views at that point you’ll hardly notice.

The first mile is fairly level. You’ll cross a meadow dotted with trees, with the granite peaks of the Needles serving as a scenic backdrop. Wildflowers are plentiful during the summertime. When you reach the sign that announces you’re entering the Black Elk Wilderness, the trail turns sharply right. Here, you’ll encounter your first views of the valley below. As nice as this spot is, the scenery only gets better from here! If you need a rest, there’s a bench where you can catch your breath. Take a seat and gaze across the valley; there’s an unobstructed view of Black Elk Peak from here, with the fire lookout tower visible on clear days—your ultimate destination. It may look impossibly distant, but don’t worry—it’s not as far as it seems! Be sure to fill out the wilderness registration permit at the wooden kiosk and carry your copy with you; failure to do so could result in a fine.

From this point, the trail winds through pockets of forest and large granite outcroppings and crosses a small stream. You’ll traverse some switchbacks, but the incline is gradual and shouldn’t prove too difficult. As you make your way closer to the top, you’ll be rewarded with excellent vistas of the vast prairie to the east.

Soon after, the trail grows noticeably steeper; the last mile is the most punishing, but there are plenty of spots to pause for a break, and the final half-mile mostly involves stairs. You’ll feel the adrenaline when the fire lookout tower looms before you, beckoning you forward.

PROS: Incredible views; a moderate hike suitable for most people; abundant opportunities to spot wildlife.
CONS: Black Elk Peak is widely considered the crown jewel of the Black Hills; as such, it’s very popular and can become quite crowded, especially during the summer months.

Insider’s tip: To avoid crowds, set out from a less-popular trailhead, such as Lost Cabin #2 or Grizzly Bear Creek #7.

This hike will likely be the literal high point of your visit! You won’t find a better view anywhere else in the Black Hills. Depending on the weather, you might literally find yourself above the clouds. On a clear day, you can see four states: South Dakota, Wyoming, Montana, and Nebraska. Plan on spending plenty of time exploring the summit; a stone fire tower (built by the Civilian Conservation Corps in 1938 but abandoned since 1967) offers shelter from the elements and a ladder that leads to an enclosed observation deck with 360-degree panoramic views. The rocky cliffs below the tower allow you to venture away from the crowds for a bit of solitude, but watch your step—these can be steep and treacherous in places. The colorful cloths tied around trees are Native American prayer ties; they usually contain a pinch or two of tobacco and are meant as offerings to The Great Spirit in exchange for blessings. Please don’t disturb these in any way! A dam and pump house can be found down a short flight of stairs. Depending on the time of day and number of hikers, you might see deer, elk, mountain goats, bighorn sheep, pronghorn antelope, and other critters.

Don’t forget these essentials: Camera; water; layers of clothes to account for sudden changes in weather.