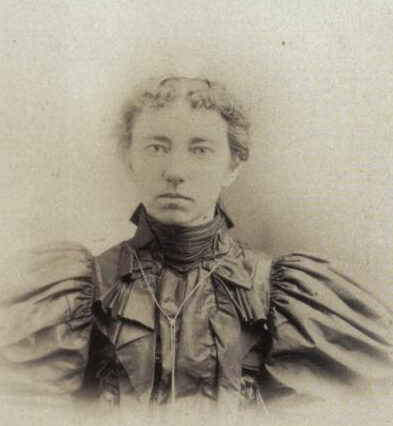 Carrie Ingalls and her family are tightly woven into the fabric of South Dakota’s history. Laura Ingalls Wilder and her series of novels based around her life on the western frontier have been beloved by families since the 1930s.

In the span of eleven novels, Laura shared the struggles and triumphs of her family as they faced the uncertainties of the wild west. For most, her younger sister Caroline Celestia Ingalls — or Carrie — is simply a footnote to Laura’s story, mentioned only briefly and often referred to as small and frail. She was anything but small in her adult life, and would in fact have a successful career that placed her in South Dakota’s history in her own right.

The Ingalls come to the Dakotas

When the Ingalls family moved to De Smet, South Dakota, Carrie was only nine years old. She would spend the rest of her childhood there, eventually pursuing her teaching certificate. After a short time teaching in De Smet, she decided it wasn’t her calling and took up the printing trade. Carrie became an apprentice at the local newspaper when she was 19. She started as a typesetter but quickly became skilled in all aspects of the printing industry, while also excelling at writing as a journalist. This talent landed her a job with E. L. Senn, the owner of several newspapers throughout the state and the region. The job required her to travel, which Carrie enjoyed thoroughly.

The ailments that plagued Carrie as a child didn’t completely resolve as an adult, and in her 30s she travelled to Colorado and Wyoming in search of a more temperate climate. She would return to South Dakota after a short time, and while working for E. L. Senn won the right to a homestake claim near the town of Topbar, South Dakota. It was rare for an unmarried woman of the time to own land, but Carrie fulfilled the claim by living in a tar-paper shanty for six months out of the year.

In 1911, E. L. Senn acquired newspapers in Keystone and Hill City and sent Carrie to run them. At the age of 41, she arrived in the Black Hills as a landowner and a businesswoman, both rare for the time. She settled into Keystone, where she managed the Keystone Recorder and worked for the Hill City Star. Within her first year in Keystone she met and wed mining prospector David Swanzey, who was a widower with two young children. Carrie would discontinue her newspaper career shortly after to focus on raising her stepchildren, Mary and Harold.

In 1924, Carrie’s mother passed away, and her sister Mary moved across the state to live with the Swanzey family. Mary’s stay in Keystone would be brief, as she passed away four years later from pneumonia and complications from a stroke. Carrie herself would continue to live in Keystone until her death in 1946. She is buried alongside her parents and sisters at their family plot in De Smet.

Her fame may be retrospectively related to her sister, Laura Ingalls Wilder, but Carrie Ingalls Swanzey is an important figure in Black Hills history. She was an astute businesswoman who laid the foundation for newspapers in the region. Her husband David N. Swanzey is known as the man who named Mount Rushmore, and her stepson Harold helped carve it. A collection of memorabilia of the Ingalls family resides at the Keystone Historical Museum. They also share the history of her extended family who lived there.

The town of Keystone celebrates Carrie’s birthday every July with food and activities popular in her lifetime. Occasionally actors and actresses from the popular “Little House on the Prairie” TV show make an appearance, as well.