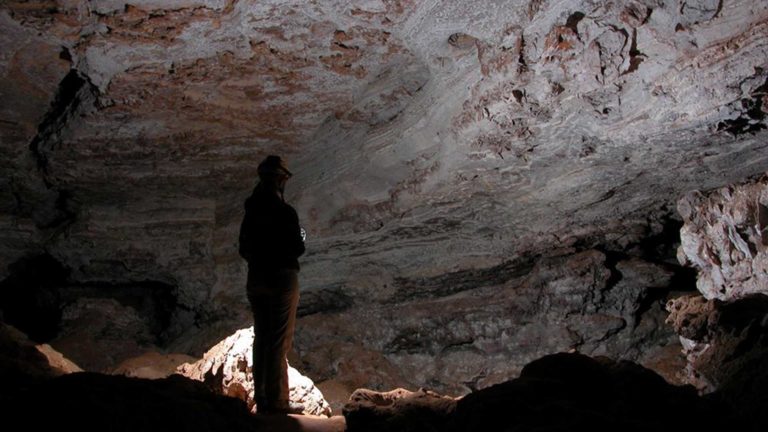 President Theodore Roosevelt approved the establishment of Wind Cave National Park on January 9, 1903. The park was the first area set aside to preserve and protect a cave system and later became known for the re-introduction of bison, pronghorn antelope, and elk, as well as the protection of a significant prairie ecosystem.

For generations,Native Americans have passed down oral histories related to openings in the Black Hills, which emitted wind. The recorded discovery of Wind Cave by non-Indians was in 1881. Jesse and Tom Bingham were attracted to the cave by a whistling noise. As the story goes, wind was blowing out of the cave entrance with such force that it blew off Tom’s hat. A few days later when Jesse returned to show this phenomenon to some friends, he was surprised to find the wind had switched directions and his hat was sucked into the cave. Today, we understand that the direction of the wind is related to the difference in atmospheric pressure between the cave and the surface.

The first person reported to have entered the cave was Charlie Crary in the fall of 1881. He claimed to have left twine to mark his trail, and indeed, others entering the cave later found his twine. These early explorers were the first to see a rare cave formation called boxwork, composed of thin calcite fins resembling honeycombs.

Several mining claims were established at Wind Cave, but the most noteworthy one was by the South Dakota Mining Company in 1890. J.D. McDonald was hired to manage the claim. The mining was unsuccessful, but McDonald and his family realized they could make money by giving cave tours and selling formations from the cave. They filed a homestead claim over the opening and worked on improving a manmade entrance and enlarging passageways for tours. One of J.D.’s sons, Alvin, spent much of his time faithfully keeping a diary as he explored and mapped the cave. On January 23, 1891, Alvin wrote that he had “given up finding the end of Wind Cave.”

In the summer of 1891, business was improving and more modifications to the cave were needed. A man known as “Honest John” Stabler formed a partnership with the McDonalds and the two families created the Wonderful Wind Cave Improvement Company. Cave passages were widened and wooden staircases were installed. A hotel was built near the cave entrance and a stagecoach provided rides to the cave.

During the fall of 1893, J.D. and Alvin McDonald went to the Columbian Exposition in Chicago to advertise the cave. On the trip Alvin caught typhoid fever, and died that year at the age of 20. Shortly after Alvin’s death, things began to go sour for the Wonderful Wind Cave Improvement Company. The McDonalds accused the Stablers of keeping profits for themselves and demanded additional money. Meanwhile Peter Folsom had gained control of the mining claim on the cave. Folsom and the Stablers joined forces against the McDonalds in court, with both sides trying to prove that the other party had no claim to the cave. In December 1899, the Department of the Interior decided that since no mining or proper homesteading had taken place, neither party had any legal claim to the cave. In 1901, the land around the cave was withdrawn from homesteading.

On January 9, 1903, President Theodore Roosevelt signed the bill creating Wind Cave National Park. It was the seventh national park and the first one created to protect a cave.

In 1912, the American Bison Society was looking for a place to reestablish a viable herd. Because of the excellent prairie habitat around the park, a national game preserve managed by the U.S. Biological Survey was established bordering Wind Cave. Fourteen bison came from the New York Zoological Society, twenty-one elk arrived from Wyoming and thirteen pronghorn came from Alberta, Canada.

In July of 1935, the game preserve became part of Wind Cave National Park. During the early years of the preserve, the animals were kept in small enclosures. Eventually, it was realized that they needed more space. The bison and elk required additional forage, and the pronghorn needed room to escape from predators. With the help of the Civilian Conservation Corps (CCC), fences within the park were removed. And in 1946, 16,341 additional acres were added, enlarging the park to 28,059 acres.

Interest in the wildlife attracted more visitors to the park and additional improvements were necessary. Other Civilian Conservation Corps projects in the 1930’s included roads, the entrance to the cave, concrete stairs in the cave, the elevator building and shaft, and other structures.

During the 1950’s and 60’s, park wildlife was the focus of much attention. Because of the lack of large predators like wolves and grizzly bears, the bison and elk herds had grown to the point that they were literally “eating themselves out of house and home.” Park rangers began to evaluate the carrying capacity of the park. To solve the problem of overgrazing, the bison and elk herd sizes were reduced. Rangers also worked to improve the grassland by reseeding overgrazed areas with native grasses and controlling exotic plant species. In the 1970’s and 80’s, managers continued to focus on caring for the wildlife and rangeland by building an understanding of how the natural systems should function.

The mission of Wind Cave National Park is to preserve and protect the natural resources. Because of its relatively small size and because there are missing parts, managers must take an active role in helping the ecosystems function as they might have in the past. This requires understanding how everything in the park is interrelated. Park rangers work with researchers to replicate that natural system using prescribed fires, culling of bison and elk herds, and biological control of exotic plant species.