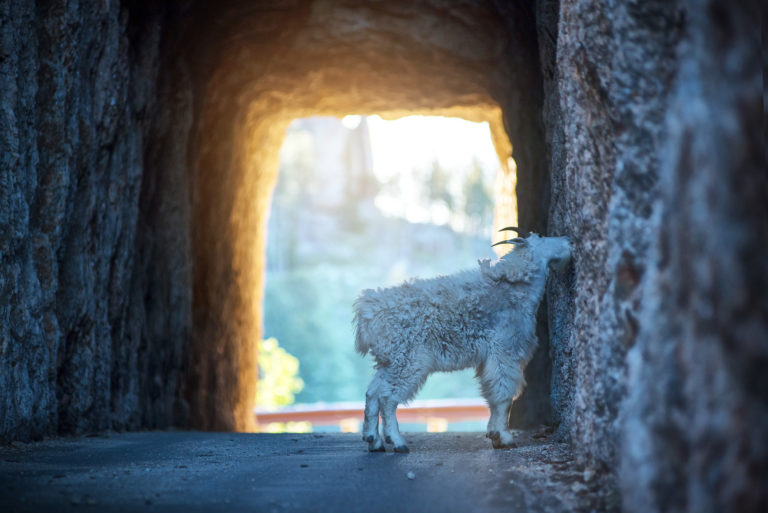 The Odd History of Mountain Goats in the Black Hills

Many people, both tourists and native South Dakotans, are surprised to learn that mountain goats are not native to South Dakota. These sure-footed animals are often seen climbing around Mount Rushmore and are one of the state’s most iconic animals, next to bison and bighorn sheep. But where did they come from?

Mountain goats’ natural range is in the Rocky Mountains, Cascade Mountains, and other mountainous regions in the western United States. Until the 20th century, they did not live in South Dakota.

In order to attract more tourists, Custer State Park in the Black Hills opened a zoo in the 1920s. The Custer State Park Zoo housed a number of animals including bear, deer, elk, bobcats, wolves, porcupines, foxes, a moose from Yellowstone, coyotes, and badgers. Visitors could catch a glimpse of these animals without the danger of seeing them in the wild.

In 1924, six mountain goats were obtained from Alberta, Canada and placed in enclosures in the zoo. The first night, two of them escaped. By 1929, all remaining mountain goats had gotten free. During this time, a bear also escaped, but unlike the bear, the crafty mountain goats disappeared into the mountains and could not be found. The escape artists headed to the Black Elk Peak range, where they were able to adapt to their new habitat and breed with each other.

By the late 1940s, an estimated 300 to 400 mountain goats lived in the Black Elk Peak area. In recent decades, the population has declined, so new mountain goats from Colorado and Utah have been transplanted into the area to provide genetic diversity to the population that is all descended from the six original goats.

They have since spread throughout the Black Hills and are seen around Custer State Park, Mount Rushmore, the top of Black Elk Peak, and the Deerfield Lake area. The original six must have been busy!