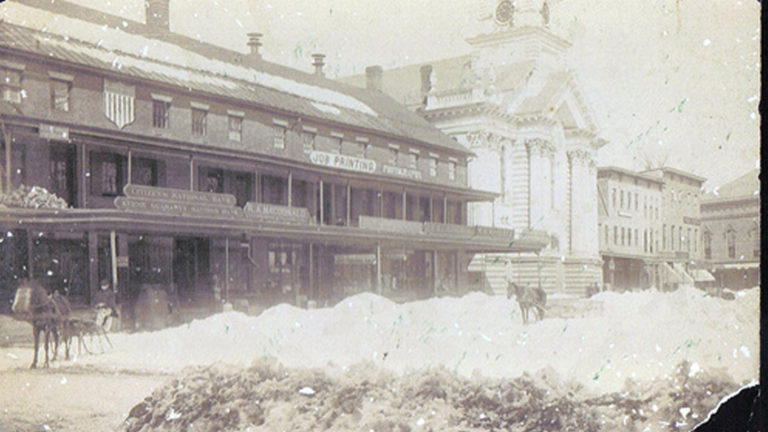 The Schoolhouse Blizzard of 1888

South Dakota was still only a territory when it was hit by one of the United State’s most devastating blizzards.

From November 1887 through January 1888, ice storms and far sub-zero temperatures plagued the area of the Dakotas, Minnesota, Wisconsin, Wyoming, Kansas, Idaho, Montana, and Nebraska. The December snowfall measured up to 40 inches. The epicenter of the storm was in present day South Dakota.

The day of January 12, 1888 was unusually pleasant due to a warm air from Montana. Children and teachers enjoyed the weather and farmers were happy to have a day of respite from the bitter Midwestern temperatures. Many people ventured outside the home for errands or school without enough dense winter clothing—but the good day did not last, and a freezing cold front slammed into the unfortunate states. Within an hour, the calm day turned into a terrifying blizzard with 60 mile an hour winds and 15 foot tall snow drifts.

“About 3:30, we heard a hideous roar. . . . At first we thought that it was the Omaha train which had been blocked and was trying to open the track. . . . the storm came as if it had slid out of sack. A hurricane-like wind blew, the snow drifted high in the air, and it became terribly cold. Within a few minutes, it was as dark as a cellar, and one could not see a hand in front of their face,” a farmer from Valley Springs, SD described.

Some teachers let students leave the school houses, hoping they would be able to get home before the blizzard worsen. Most of the deaths from the blizzard were from this scenario, in which the children then froze to death while desperately trying to get home.

Schoolteacher Minnie Freeman of central Nebraska became a folk hero when she was able to lead over a dozen pupils to safety after the roof of the schoolhouse blew off. She received more than 80 marriage proposals after tales of her bravery spread. Other teachers weren’t as lucky, however. Lois May Royce determined that the schoolhouse’s fuel supply would not last the night. She attempted to lead her three pupils to her boarding house a mere 200 yards away, but they got lost due to the extremely low visibility. The children froze and Royce suffered such severe frostbite that her feet had to be amputated.

As the morning broke, parents rushed to schoolhouses to search for children who hadn’t returned. Near Warner, SD, the local newspaper reported the “whole school dead; sad story of the loss of teacher and pupils, near Warner, confirmed.” An estimated 235 people died during the one day blizzard, most of which were schoolchildren who froze to death on their way home.

The newspaper titles afterwards read “scores frozen to death”, “nearly one hundred residents of Dakota perish miserably in the ruthless blizzard”, “over fifty citizens reported missing, for whose safety grave fears are entertained”, and “Iowa, Minnesota, and Nebraska swell the list of casualties—name of the victims.”