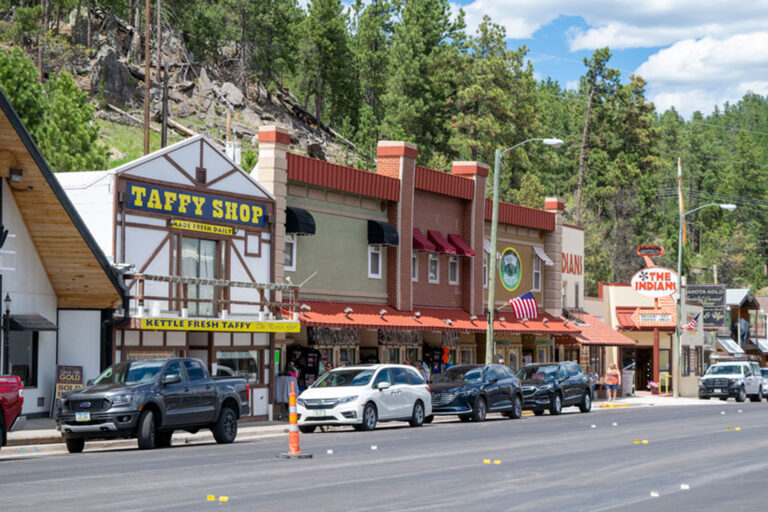 The Story of Keystone

Following the 1876 discovery of placer gold in Battle Creek, just east of present-day Keystone, a settlement named Harney (for the nearby mountain) was established as a base of operations for gold prospectors seeking their fortunes. Fred Cross arrived in 1877 and built a cabin in Buckeye Gulch, making him the first permanent settler in the region. When gold became increasingly difficult to extract from the creek, most of the miners headed to the northern Black Hills, pinning their hopes on richer gold strikes in Deadwood and Lead. A few intrepid souls hung on, and three of those men—A.J. Simmons, William Claggett, and T.H. Russell—were confident heavy hydraulic equipment would enable them to easily dig their way through the deep gravel beds that had proved a hindrance to the other miners. They formed the Harney Peak Hydraulic Gold Mining Company in 1883 after investing in equipment and constructing an elaborate system of flumes and sluices to transport water from Battle Creek and Grizzly Bear Creek. Despite their hard work, the men were unable to turn a profit and eventually suspended operations.

That same year, tin and mica were discovered one mile to the south, and the Etta Mine opened. A conglomerate of American and British investors spent more than $2 million to purchase over 1,100 mining claims and formed the Harney Peak Tin Company. Mining operations continued on-and-off until the mid-1900s.

In 1891, William Franklin, Thomas Blair, and Jacob Reed discovered the Keystone Mine and established a new community named after the mine (“keystone” refers to the wedge-shaped capstones often constructed around the entrance to a mine). Profits were modest and the town attracted few newcomers, but in 1894 William Franklin was out for a walk with his adopted daughter, Cora, when he stumbled upon a rich vein of gold ore at the base of Mount Aetna. He named the new mine the Holy Terror, a tongue-in-cheek homage to his wife Jenny, who often dragged him home from the saloon too early for his liking. The Holy Terror Mine would become one of the richest gold-producing mines in the country, and sparked a mining boom that caused Keystone’s population to swell to over 2,000, making it the largest city in Pennington County at the time. An infrastructure consisting of houses, saloons, hotels, churches, and a school sprang up to serve the needs of the town’s residents.

The arrival of the railroad in 1900 was a key turning point in Keystone’s history. Most of the mines in the area ran into problems ranging from accidents and claim disputes to flooding. Multiple fires tore through the town’s business district over the years, decimating the local economy, but cheap freight rates allowed feldspar, arsenic, and rare mineral mining to flourish during the 1920s. When sculptor Gutzon Borglum chose Mount Rushmore for the site of his carving project honoring four American presidents in 1927, Keystone—a mere three miles away—was an important source of manpower for the project; many of the town’s miners assisted in the blasting and carving of the monument, which continued seasonally until 1941. Keystone’s economy shifted from mining to tourism, and today the town remains a popular destination for visitors from around the world, who come to visit the “Shrine of Democracy” and other locations throughout the Black Hills.

For more information on attractions and events in Keystone, visit us here.