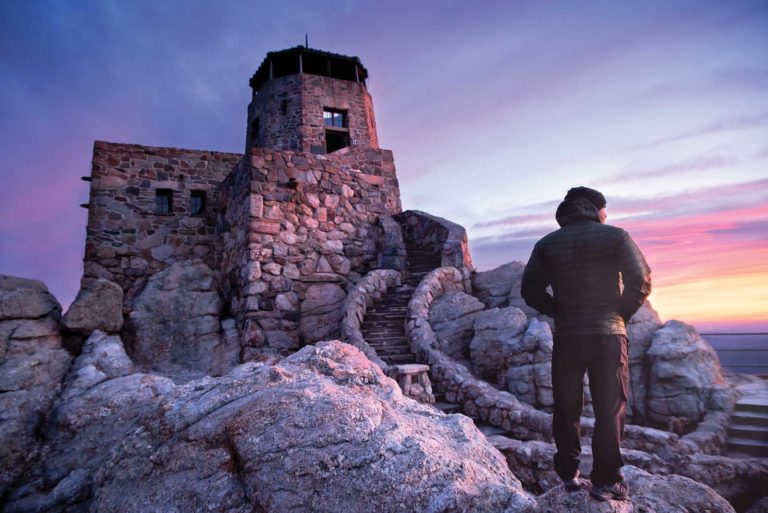 From Harney to Black Elk Peak: Evolution of a Name

What’s in a name? If you’re a long-time South Dakotan, quite a bit. Residents who grew up hiking Harney Peak all their lives had to switch gears and start calling their beloved mountain—at 7,242 feet (2.21 km) the highest point east of the Rockies—Black Elk Peak following a name change on August 11, 2016.

The U.S. Board on Geographic Names made the decision out of respect for Native Americans, who considered the mountain a holy site and found its original name derogatory and offensive. It was named in honor of Army Gen. William S. Harney in 1855. Harney commanded a regional military expedition that year responsible for the massacre of Sioux warriors, women, and children in the Battle of Ash Hollow in Nebraska. The attack was in retaliation for earlier Sioux raids, which were carried out in response to the dispute over the Treaty of Fort Laramie. Many newspapers across the country considered Harney’s battle a heroic victory, the New York Times was more critical, calling “the so-called battle…simply a massacre” due to the slaughter of so many women and children.

The Lakota Sioux tried in vain for decades to get the name changed, but their pleas fell on deaf ears. Their efforts were renewed in 2014 when Basil Brave Heart, a member of the Oglala Sioux tribe, proposed renaming the mountain Black Elk Peak to pay tribute to a Lakota medicine man named Black Elk, who received a great vision after trekking to the top of the peak at the age of nine. He recounted in the book Black Elk Speaks, “I was standing on the highest mountain of them all, and round about beneath me was the whole hoop of the world. And while I stood there I saw more than I can tell and I understood more than I saw.” Black Elk went on to inspire his people, becoming a revered holy man who participated in the Battle of the Little Bighorn and Wounded Knee Massacre. Later in life, he organized an Indian show designed to educate tourists about Lakota culture and traditions.

“To put a man’s name on a mountain who killed Native people is wrong,” Brave Heart argued. The South Dakota Board of Geographic Names took his request under consideration and opened up a public discussion about changing the name to either Black Elk Peak or Hiŋháŋ Káǧa (“Owl Maker,” the Lakota name for the mountain based on rock formations that resembled owls). The proposal was met with overwhelming oppositiion by the public, including South Dakota Governor Dennis Daugaard and U.S. Senator John Thune, and the matter was dropped. However, the U.S. Board on Geographic Names, which has jurisdiction over federal names, agreed that the Harney name was offensive and, in a 12-0 unanimous vote (one person abstained), disregarded the lack of statewide support and officially changed the name to Black Elk Peak. Though the decision drew the ire of South Dakota state officials, they acquiesced and agreed to honor the federal government’s wishes.

Today, there is much less controversy over the renamed mountain. Visitors and locals alike flock to the Black Elk Wilderness, making the seven-mile roundtrip hike to the summit. Their efforts are rewarded with breathtaking views; on clear days, four states are visible (South Dakota, Wyoming, Montana, and Nebraska), and the stone fire tower—constructed by the Civilian Conservation Corps in 1938—provides shelter from the elements and 360-degree panoramic views from the enclosed observation deck. Longtime residents sometimes still refer to it as Harney Peak, but most have adapted to the new name and give it very little thought.

What’s in a name, you ask? In the end, very little…and a whole lot.