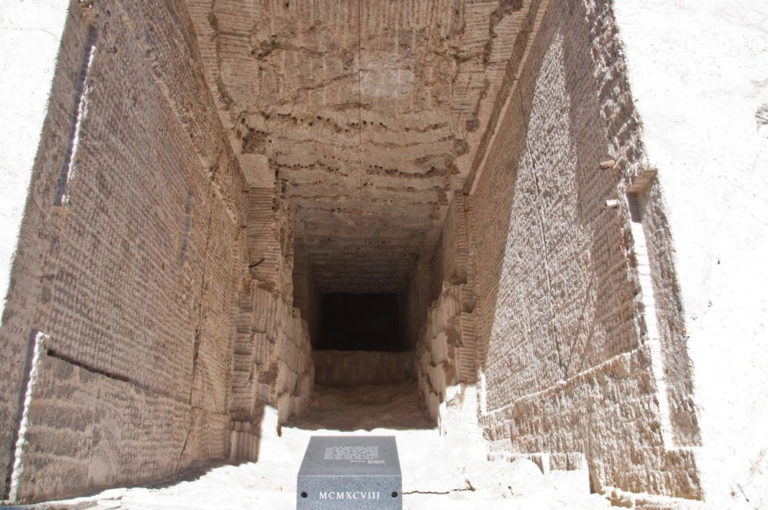 Inside Mount Rushmore’s Hall of Records

Mount Rushmore is an iconic American landmark and South Dakota’s most popular tourist attraction, yet many people don’t realize it contains a hidden chamber that houses a time capsule of sorts: a collection of sixteen porcelain panels, residing in a teakwood box inside a titanium vault, that tell the story of Mount Rushmore’s construction. It’s off limits to the public, intended instead to serve as a repository of records to ensure the history of the monument isn’t lost to people thousands of years in the future.

The Hall of Records was conceived by Mount Rushmore sculptor Gutzon Borglum even before he began work on the monument in 1927. His original vision for the memorial included an inscription carved next to the presidents that would describe nine important events in U.S. history occurring between 1776 and 1906. The idea was good in theory, but actually turning it into reality proved problematic. For starters, the text couldn’t be made large enough to read from a distance, and it would have taken up too much of the mountain—specifically, the spot intended for Abraham Lincoln’s head.

Borglum instead decided to create a chamber within the mountain to house important documents and artifacts that played a role in shaping the country’s history. He envisioned a grand hall measuring 80′ tall x 100′ long, accessible via an 800-foot granite staircase, that would include busts of famous Americans, as well as bronze and glass cabinets containing priceless historical documents like the U.S. Constitution and Declaration of Independence. A massive bronze eagle with a 38-foot wingspread would be mounted above the entrance, with an inscription reading America’s Onward March and The Hall of Records above the door. Borglum believed that future generations might find Mount Rushmore as much a mystery as Stonehenge is to modern man, and wanted to come up with a way to preserve its history and ensure the story behind the carving would never be forgotten.

Work on this ambitious project began in July 1938 but was halted a year later when Congress declared construction should focus on the presidents first. The onset of World War II and Borglum’s death in 1941 put an end to the carver’s conceived chamber, with a 70-foot cavern blasted into the mountain the extent of his progress. It sat unfinished for decades until 1998, when officials revived a scaled-back version of the idea. They placed sixteen panels detailing the carving of Mount Rushmore, the reason why each president was chosen, a biography of Borglum, and the words to the Bill of Rights, U.S. Constitution, and Declaration of Independence inside a wooden box. This repository of records was then sealed inside a titanium vault, placed inside the tunnel, and protected by a 1,200-pound slab of granite. A capstone contains an etching of a Borglum quote that reads, “…let us place there, carved high, as close to heaven as we can, the words of our leaders, their faces, to show posterity what manner of men they were. Then breathe a prayer that these records will endure until the wind and rain alone shall wear them away.”

Sadly, the Hall of Records is not open to the public, mostly for safety concerns. A few lucky individuals have had an opportunity to view it for themselves over the years, but strict security measures have been in place following a breach by Greenpeace activists, who hung a banner reading “Stop Global Warming” over the monument in 2009. Now, even high-ranking officials are banned from seeing this hidden, and largely unknown, chamber. But its true intent was always to serve as a historical record for future civilizations, so we can imagine that Borglum would be pleased to know his project was finally completed…and may one day do exactly as intended.