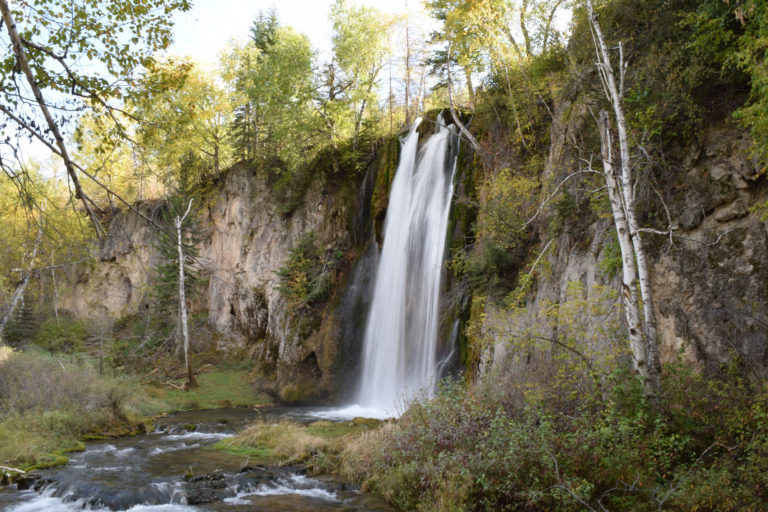 The Story of Spearfish

When gold was discovered in Deadwood Gulch in 1876, thousands of prospectors flocked to the northern Black Hills seeking riches. The area at the mouth of Spearfish Canyon had long attracted Native Americans, who “speared” fish in the fast-flowing waters of the creek that ran through the rocky canyon—a practice that inspired the town’s name. Originally called Queen City when it was established in 1876, the settlement’s location in a broad valley was more conducive to agriculture than mining. The town served an important need by supplying the miners working claims in Lead, Deadwood, and other mining camps with food. While other mining communities experienced boom-and-bust periods, Spearfish prospered as a result of a diverse economy that focused on agriculture and commerce; irrigated farming, cattle ranching, dairy processing, logging, milling, and retail were all thriving enterprises that made the town an attractive destination for those who weren’t comfortable taking their chances on mining.

In 1883, Dakota Territorial Normal School was founded in Spearfish, eventually adding four-year degrees and graduate courses. The school cycled through a number of names including Black Hills Teachers College and Black Hills State College, before its designation as Black Hills State University in 1989. It is one of the oldest educational institutions in South Dakota and remains a source of pride in the community.

When a railroad spur was built through Spearfish Canyon in 1893, the area’s stunning natural beauty was no longer a secret; visitors came to see the canyon’s ruggedly steep limestone walls, forested hillsides, and natural waterfalls, giving rise to a new industry based on tourism. Residents would go on to build a highway through the canyon in the early 20th century, further promoting its visibility by opening it up to automobiles. Famed architect Frank Lloyd Wright was one of its biggest proponents, touting the canyon’s “unique and unparalleled” beauty and describing it as “even more miraculous” than the Grand Canyon in 1935. Spearfish Canyon became home to the Black Hills Passion Play in 1938, a popular summer event that attracted over six million visitors until its closure in 2008.

In an effort to introduce and establish a trout population in the Black Hills, the Spearfish National Fish Hatchery was established in 1896 on the site of a former sawmill. It was one of the first federal fish hatcheries in the U.S. and had the capacity to store and incubate as many as 2.5 million eggs. The first trout were released into Little Spearfish Creek and Whitewood Creek in 1900 and operations continued until 1983, when the hatchery was closed due to budget cuts. It reopened in 1989 as the D.C. Booth Fish Hatchery with funding for a museum and archives, and remains a popular attraction to this day.

Today, Spearfish is one of the fastest-growing “micropolitans” in the U.S., defined as an urban area with a population of at least 10,000 but less than 50,000. It’s a college town in the truest sense, with a thriving arts scene, an eclectic collection of restaurants and brewpubs, and world-class scenic beauty.

For more information on attractions and events in Spearfish, visit us here.