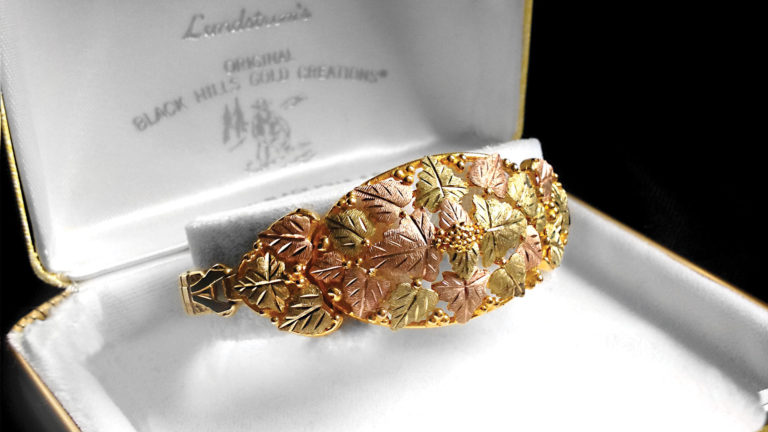 Originating from a legend, Black Hills Gold Jewelry has ultimately become one of the Black Hills region’s most recognized and collectible products. The familiar tri-colored leaf and grape design of Black Hills Gold has become a symbol for the area over the past century, and into the new millennium.

It is widely acknowledged that a would-be gold prospector named Henri LeBeau was the father of Black Hills Gold’s distinctive grapes and leaves pattern. The legend of Black Hills Gold’s design is attributed to a dream said to have been experienced by LeBeau while he was wandering in the Hills in the late 1870s. Upon falling asleep in a remote location in the northern Black Hills, LeBeau dreamed of a creek with numerous grape vines growing along its banks. When Henri awoke, he stumbled over the next hill to see a scene much like the one in his dream. LeBeau later set about making a line of jewelry that reflected this dream, and went on to train many of the early Black Hills craftsmen in this style of design—Black Hills Gold Jewelry became a reality.