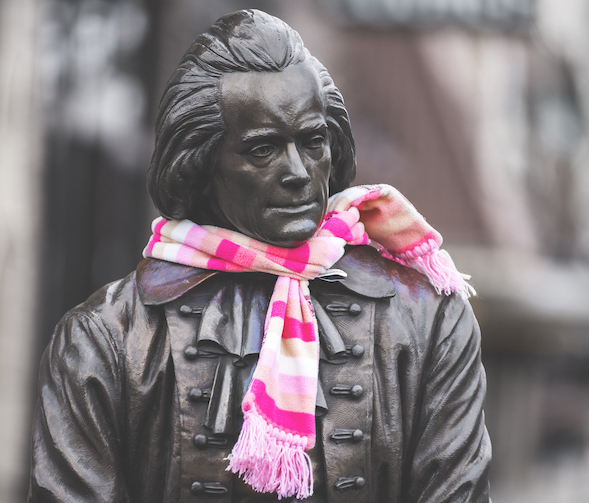 Rapid City might have one of the country’s most unique clothing drives. The local Calvary Lutheran Church puts out winter clothing (hats, scarves, gloves, and even coats) around the town by putting them on the president statues. Homeless and those in need are encouraged to take what they need.

“We’ve had homeless people come up to use when we’re putting the clothing on the statues and ask for some. They are always clearly very cold and very grateful,” said David Piper at the Calvary Lutheran Church. “We actually have a quite large homeless population in Rapid City and our winters get very cold, so this project helps them out a bit as well as draw awareness to the issue.”

The need is so great that David reported that clothing usually doesn’t stay there for more than a couple days at most. Volunteers from the church go out several times per month to put more clothing on the statues.

The project started in the winter of 2015. A local knitting group teamed up with the church and the idea of putting the clothing on the statues was born. Surprisingly, there was some pushback initially from the city government. Soon after the items were placed on the statues, they were removed after a city official explained that the city had a policy to not allow placing items on the statues.

The 2013 policy prevented people from using the statues for advertising or political statements… but also prevented the church from helping the homeless. Mayor Steve Allender soon stepped in and allowed for an exception. The winter wear could be placed on the statues.

The community has been nothing but supportive and sometimes even put their own hats, scarves, and gloves on the statues. The project relies on donations of yarn from the community. Donations come from as far as California!

“There is a lot of support for this in the community,” David said. “When we’re putting the clothing out, we get honks and waves. We get knitting and clothing donations throughout the year. We can never get enough yarn, so donations are always accepted!”

Winter clothing is allowed to be put on the statues by individuals or organizations from mid-November through mid-March.