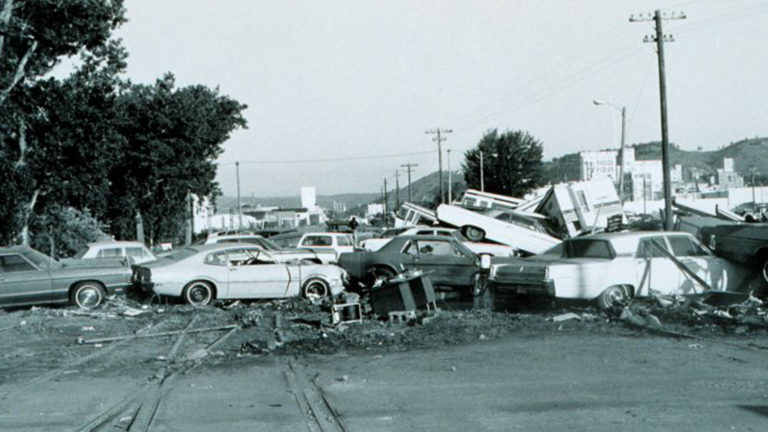 June 9, 1972 is a date no Rapid City resident living here at the time will ever forget. That afternoon, thunderstorms developed over the Black Hills and intensified. A combination of strong easterly winds along the ground and light winds above kept the storms nearly stationary, inundating the region with heavy rainfall. Flood waters from Deer Creek, Victoria Creek, Prairie Creek, and other drainages were channeled through the steep canyons to the west, eventually emptying into Rapid Creek. The water level above Canyon Lake rose 12 feet in two hours, eventually causing the spillway at Canyon Lake Dam to fail. The resulting flash flood tore through town, causing widespread damage and destruction. The statistics are staggering: 238 people perished in the flood and another 3,000 were injured. 1,335 homes and 5,000 automobiles were destroyed. Total damages were $160 million. The flood ranks as the third-deadliest in U.S. history.

The 1972 flood forever altered the landscape, leading to permanent changes in city planning. 754 acres of greenbelts were established to serve as a floodway where homes and businesses once stood, the most notable of which is Memorial Park. Conceived as a tribute to those who perished that night, the promenade features historical plaques at key points, a memorial pond and fountain, and a monument adjacent to Rushmore Plaza Civic Center dedicated to the flood victims, each of their names etched in bronze.

In honor of the flood victims, Friends of Rapid City Parks holds an annual Memory Walk on the anniversary of the flood. Representatives from the Rapid City Fire Department, Pennington County Emergency Management, and other organizations typically share stories about the flood and the role emergency responders played. It’s a somber occasion meant to pay homage to the victims of the most destructive flash flood in U.S. history.

This year’s event is a little different than usual. Due to restrictions imposed as a result of the COVID-19 pandemic, a virtual memory walk will be held. To participate, residents are urged to take a walk along the Leonard Swanson Memorial Bike Path and read the interpretive signs to learn more about the flood. They can use their smartphones to access QR codes on each of the signs, and download a free Avenza Maps application to their phone to view historic photos of Rapid City after the flood.