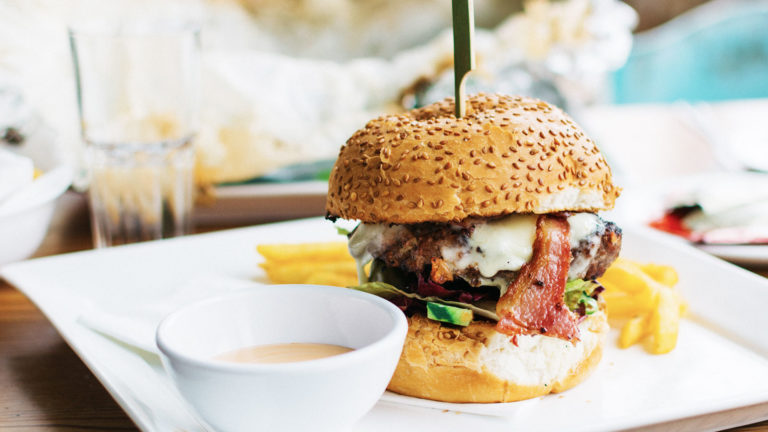 Kuchen became the official dessert of South Dakota in 2000. It is a traditional German pastry (“kuchen” literally means “cake” in German) brought to South Dakota by homesteaders. Often resembling a pie, it is made with sweet bread and contains a fruit filling.

It can be found at Dakotah Steakhouse in Rapid City, Laughing Water Restaurant at the Crazy Horse Memorial, and Cedar Pass Lodge Restaurant in Badlands National Park.

Travelling through the Black Hills, heading north? Go to the Schmeckfest (German “festival of tasting”) held in Eureka every spring for authentic, freshly-made Kuchen.

Indian Tacos are similar to traditional tacos but served on fry bread (South Dakota’s state bread!) instead of taco shells. After Native Americans were relocated to reservations, they were rationed flour, powdered milk, salt, and lard. From these rations, Indian tacos were invented. Since then, they have become a common food in states with large Native American populations.

South Dakota’s state fish is abundant in the rivers and lakes of the state. It tastes succulent and rich with just the right amount of flavor. No matter how it is cooked, South Dakotans love walleye!

Buffalo used to roam the plains of South Dakota in huge herds. Today, numbers have dwindled but the state still boasts some of the largest wild herds in the world. The herd in Custer State Park alone numbers more than 1,300. South Dakota chefs use buffalo to make foods like buffalo burgers, buffalo soup, buffalo steak, and even buffalo meatloaf!

Chislic originated in Russia but is now unique to South Dakota. It is thought to have been introduced to South Dakota by a Russian immigrant businessman, but no one is too sure on the details. Chislic is essentially deep-fried cubed meats. Popular meat varieties include lamb, wild game, pork, and beef.

Wojapi is a Native American dessert dipping sauce made from berries. It is often eaten with fry bread or as an ice cream topping.

South Dakota has no shortage of high-quality fudge available. Buy some of this creamy confectionery and enjoy it with a glass of milk- the official state drink.

Fudge can be found at TurtleTown in Hill City, Mountain Treats in Hill City, Custer County Candy Company in Custer, Grapes & Grinds in Keystone, and Mostly Chocolates in Rapid City.

Kolache originated in Central Europe and were brought over by Czech immigrants. It is a small, puff pastry with fruit filling in the middle.

Traveling to the Eastern side of the state of South Dakota? Kolaches can be found at Tyndall bakery in Tyndall and Czech Days Celebration held every June in Tabor.