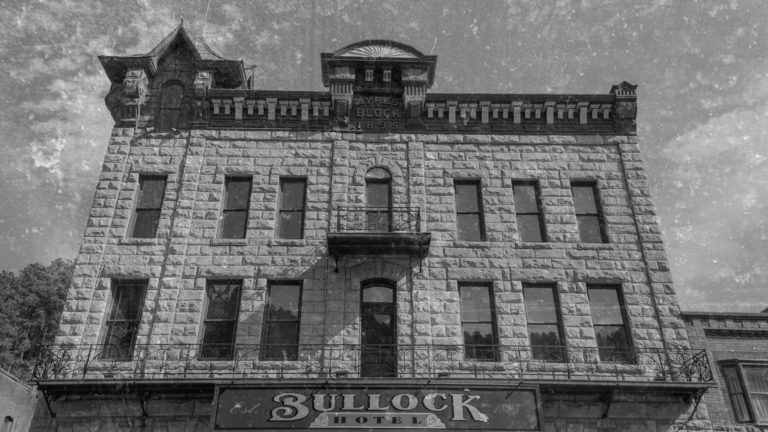 The modern-day Black Hills is built on the remains of centuries of Wild West, homesteader, and Native American history. Over the many years, legends of ghosts, goblins, and ghouls have cemented themselves in the state’s lore. Looking for a fright? Check out these paranormal hotspots and dig into the mysterious history of spooky South Dakota!

The Hotel Alex Johnson is known as one of the most haunted hotels in the state and has be featured in the SyFy Channel’s hit show “Ghost Hunters.” The most commonly reported ghost is the Lady in White. It is said that in the 1970s, a young bride committed suicide by jumping out the window of room 812. She now wanders the halls of the eighth floor. Guests in her room are said to find the window mysteriously opened when they awake in the morning. Guests on the eighth floor have also reported a young girl knocking on the door at night and giggling, only to disappear once the door is opened. The ghost of Alex Johnson himself is reported as haunting the hotel since his death in 1938. He is said to have stayed behind to ensure the hotel operations run smoothly. The workaholic can’t even rest in death!

The hotel offers a Ghost Adventure Package which include a K2 meter for detecting ghosts, accommodations in a room that has reported hauntings, and dining credits.

The Bullock Hotel was built around 1894 by famous Deadwood sheriff Seth Bullock. The hotel was featured in the Travel Channel’s show “Ghost Adventures.” The ghost of the sheriff has been reportedly spotted by tourists and employees alike. Bullock is still running his hotel from behind the grave, as paranormal events are said to increase when staff are working slowly or taking a break. Ghost tours are available every evening.

Employees of the Homestake Opera House have reported seeing a white figure on stage when no one is around and hear noises coming from the stage. Covered by Jaci Conrad for the Black Hills Pioneer, the Black Hills Paranormal Investigators explored the opera house and concluded that they “were confronted by undeniable evidence of paranormal activity.” They reported rocks thrown at them by the ghost, noises on stage, and tables and chairs in the dressing room being moved. In 1919, a Spanish flu epidemic took ahold in Lead, so more than 100 of the sick were housed in the opera house, as the hospital was overflowing with patients. Some of the patients died in the opera house.

While the Adams House is now a popular restored historic home, it has a sordid past. W.E. Adams lost his wife, daughter, and infant granddaughter all within 48 hours in 1925. He remarried to a woman named Mary, and he died in the house in 1934. Mary abandoned the home soon after, claiming it was haunted. Visitors to the museum have claimed to hear unexplained voices and footsteps, see a shadow in the bedroom window, and see an apparition in the rocking chair.

The Fairmont Hotel has been the site of many misfortunes. It was originally a brothel and saloon. The earliest recorded death was in 1907 when an upstairs girl, Margaret Broadwater, committed suicide by jumping out a window on the third floor. In the same year, a man shot and killed another man in a fit of jealousy. While fleeing the scene, he accidentally shot himself and bled to death. The ghosts of these poor souls and more are said to haunt this historic hotel. It has been converted into a restaurant, but ghost tours are still available.