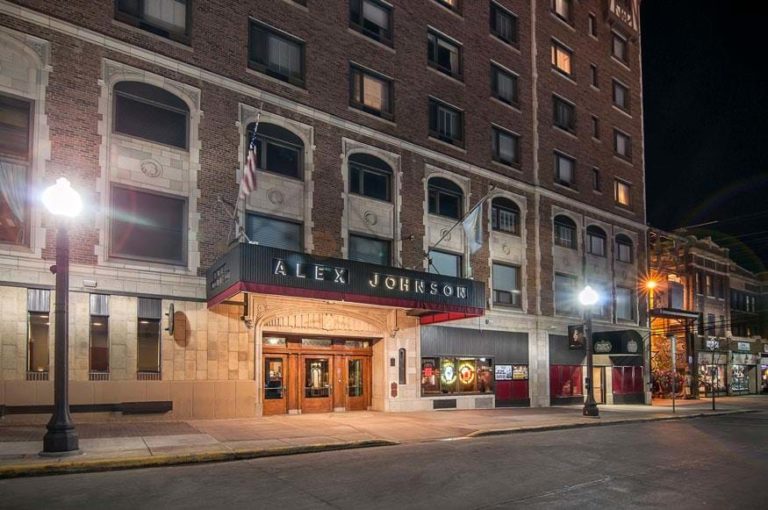 Ghosts of the Hotel Alex Johnson

The Hotel Alex Johnson looms over the Rapid City skyline like a hulking giant, its iconic red sign visible for miles. The hotel has attracted visitors from around the world since opening its doors in 1928, a guest list that has included tourists, dignitaries, presidents, celebrities—and a handful of people who checked in but have never checked out. They are permanent residents from beyond the grave, roaming the hallways and popping into rooms unexpectedly, if the legends about the hotel’s purported hauntings are real.

General Manager Domico Rodriguez is convinced the stories are true, even if he has never personally witnessed anything paranormal in the four years he has worked there.

At least not yet.

“I absolutely do believe,” he says. “I have talked to many people who experienced things they can’t explain. Not only guests, but front desk agents and other staff, as well.” Rodriguez is most impressed when visitors unfamiliar with the hotel’s haunted reputation report strange activity upon checkout.

Many of these otherworldly tales have been collected in a journal. The oversized red binder, with a cover titled The Haunting, resides on the front desk and is available for anybody to look at. Skimming through the pages is an eye-opening experience; there are detailed accounts of mysterious happenings, penned by guests and staff, dating back several years. Stories range from ghostly apparitions and mysterious knocking or growling sounds to unattended pianos playing music and elevators stopping randomly. There are even a few photos, including one that appears to show the hotel’s most famous spirit-in-residence, the Lady in White. It’s enough to send chills down the spine of even the most hardened skeptic. And Rodriguez has seen video of the wooden key rack behind the front desk shaking back and forth on its own as surprised staff members look on.

Spooky stories about paranormal activity in the Hotel Alex Johnson go back decades. There are four alleged ghosts making their presences known:

Until recently, the only story that could be corroborated was that of The Jilted Bride. Rodriguez was shown crime scene photos belonging to the Rapid City Police Department and can attest to the suicide-by-hanging. Despite exhaustive research, no other evidence turned up—until this past September, when a guest brought in a newspaper clipping. The headline reads “Fall victim identified” and the undated article talks about “a young woman who died…on Aug. 18 as the result of a fall from the eighth floor of the Alex Johnson Hotel.” The Pennington County Sheriff’s Office gives her name as Shirley, age 31, from Whitefish, Montana. Rodriguez and his staff were excited over the discovery, which offers the first solid evidence that the legend of the Lady in White—one of them, at least—may be based on fact.

I have never in my whole life walked into a room and been as instantaneously and intensely creeped out as when I walked into room 812 for the first time. My skin immediately started to crawl, and did so for the entire evening.

Unidentified guest, from the pages of The Haunting, 10/20/12

Certainly, with its German Tudor architecture, the hotel doesn’t look like your typical Hilton. It’s got a gothic, almost menacing, appearance—and that adds to its charm. Staff talk openly about the hotel’s hauntings, even offering a Ghost Adventure Package for those guests brave enough to want to stay overnight in one of the haunted rooms, which includes a K2 meter (a portable device that detects electromagnetic energy and is a favorite of amateur and professional ghost hunters), a dining credit, and free valet parking. When SyFy’s Ghost Hunters visited in 2011 (Season 7, Episode 5), they reported significant paranormal activity.

I woke up around 3 a.m. because I could feel the sheets moving. I waited for a moment, and I could feel someone slowly slide onto the bed next to me. I jumped out of bed and flipped on the light…but there was no one in the bed.

Unidentified guest, from the pages of The Haunting, 12/5/12

When asked exactly how often guests report strange activity in the hotel, Rodriguez says once a month is pretty typical. Men are more likely to experience something unusual, and incidents seem to pick up in the wintertime, though it’s possible that’s because the summer hustle and bustle has died down and guests are more likely to notice unusual happenings.

This is my second night alone as an auditor and both nights at 4 a.m. I’ve heard the sound of high heels walking back and forth…then tonight I kept hearing whispered indistinct voices of a man. Cameras show no one.

The next time you wander past the Hotel Alex Johnson, stop for a moment and reflect on its haunted legacy. Perhaps one day you’ll book a stay and your experience will be immortalized alongside others in the pages of that red journal on the front desk.