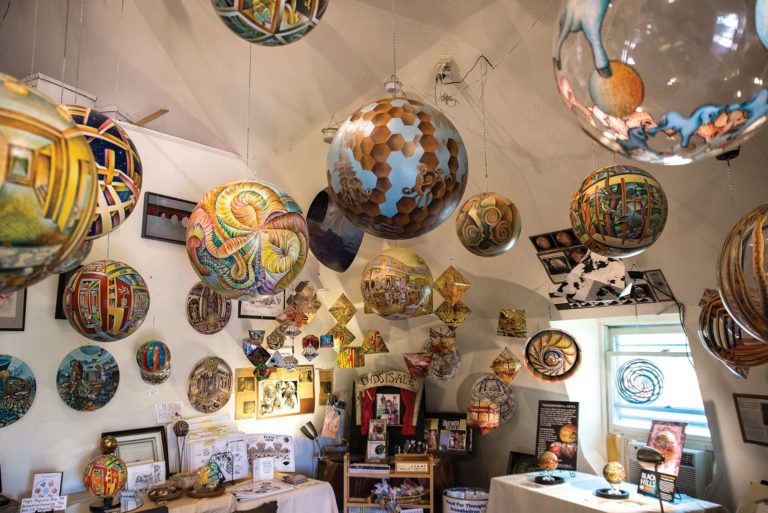 Spearfish native Dick Termes gained fame in the 1970s-80s when he created the artistic, brightly-colored globes known as “termespheres.” Having designed more than 300 termespheres, Dick has been recognized locally, nationally, and internationally. In 2014, Spearfish designated September 9 as “Dick Termes Day” and he was inducted into the South Dakota Hall of Fame. Dick has also been the recipient of the South Dakota Governor’s Award in the Arts.

Although he didn’t truly know it at the time, Dick has been an artist his whole life and exhibited talent and interest early in grade school. It wasn’t until he reached high school that he accepted and realized his interest in art and patterns. “All artists, musicians, poets, etc., find their own way to express themselves as artists. I discovered that I was able to do that more visually through art,” Dick shares.

Crediting education for much of his success, Dick has a long history in college and education. He received a bachelor’s degree from Black Hills State University and then moved to Oregon, where he taught at Klamath Falls for two years before relocating to Sheridan, Wyoming to teach. After a couple of years teaching in Sheridan, Dick decided to pursue his master’s degree from the University of Wyoming and continued his education in Los Angeles to obtain an MFA.

During his time at Otis Art Institute in LA, Dick really delved into the worlds of perspective, geometry, and the study of patterns. Encouraged to find his own niche in art and explain and defend his research, Dick developed the idea of the six-point perspective.

Imagine yourself in the center of a globe, able to look outward in all directions. This is a six-point perspective. “Even though I’m on the outside of the spheres, I’m always thinking of myself in them. It’s convexing out at me, but I imagine that it’s concaving around me,” he explains. “I always start with six equal vanishing points. If you’re in cubical space, you walk through the world with a north, east, south, west, and up and down vanishing point—six points that are equidistant.”

Not only does he create and paint termespheres; Dick patented a photographic technique called “The Total Photo.” With the help of George Fassbender, he created a dodecahedron device that could be stabilized. Then, using a Hasselblad camera, he would move the camera to the center of each surface and take a photo. The Total Photo takes 12 images, 90 degrees off each plane, and creates a photograph that represents every direction at one specific point in the surrounding scene. Many of his international works in France utilize this process.

Each of his pieces contains an optical illusion for viewers. “I would like to have [viewers] walk out of the experience of the Termesphere Gallery with an understanding of total visual space around us better, realizing that we don’t live in a rectangle or square in front of us, but rather a physical world around us every second of every day that we live, and we just have to turn and look at it,” he passionately shares.

Dick has been published in a variety of optical illusion books and calendars. “The one I am most proud of is the cover of Steven Hawkings’ A Brief History of Time,” Dick says with a smile. His most popular piece is the “Black Hills Mova,” at 200-300 pieces sold. The small termesphere rotates through light/solar power, and contains images and icons from the Black Hills, including Dinosaur Park, Mount Rushmore, Roughlock Falls, and more.

After completing his degrees, Dick returned to Spearfish and set up shop by building his gallery and exhibiting, teaching workshops, and lecturing locally and internationally. “I’m a nature enthusiast. I grew up here, I love to hunt and ski, and my family was here, so coming back to the Black Hills was an easy decision for me,” he expresses.

Dick has been creating spherical art for 51 years and shows no signs of slowing or stopping any time soon. He is always working on mockups before he creates larger pieces, and he’s always thinking about the total picture of the world around him. “He never puts his work down,” explains wife Markie Scholz. She adds with a laugh, “He’s horrible to watch TV or vacation with because he’s always thinking about what’s next in his artwork, and we always have to have his spheres and markers or pens around.” The couple have been married for more than 40 years.

Being an artist requires a lot of commitment and can be hard, but you have to go all-in. You can’t excel as an artist if you put anything less than 110 percent into your work; you have to go all in and find out how you can make a living with your artwork and skills. Dick explains, “For Markie and I, it was opening this gallery, doing workshops and lecturing.” Markie had her own artwork as well: puppet shows!

Read more about the interactive monument installed in downtown Spearfish on the corner of Main and Hudson St. You can visit his work at a unique custom gallery in Spearfish. It is also currently on display at the Dahl Arts Center, as well as a variety of colleges and galleries around the U.S., Japan, Germany, Scotland, Italy, and elsewhere. The Termesphere Gallery in Spearfish holds the majority of his work, hosting more than 50 termespheres at any given time. Take a glimpse at the geodesic dome gallery by watching this video.