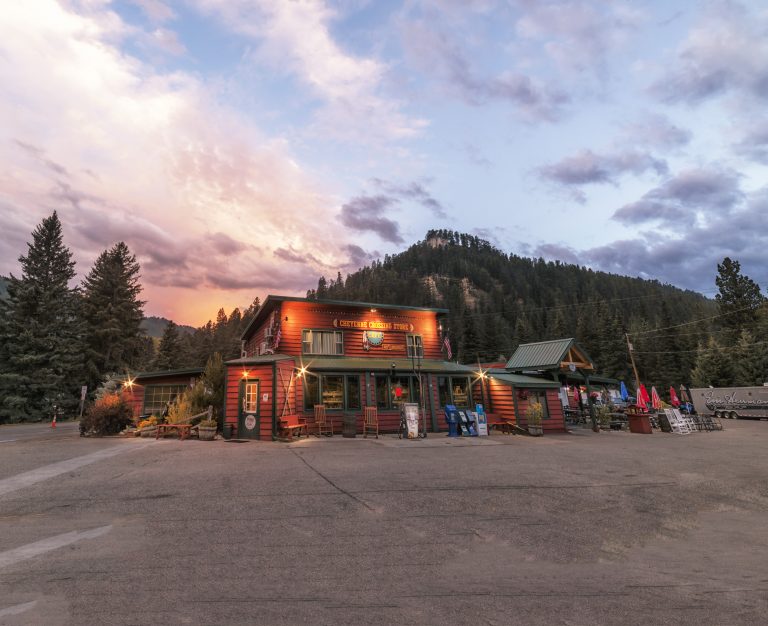 Cheyenne Crossing has been in business since 1878; first as a stage stop, later becoming a grocery store, a general store, and a livery for outdoorsmen. Today, it’s home to a lively cafe, a unique gift shop, and a cozy lodge. Cheyenne Crossing feels like you’re at your family cabin in the woods, right down to the mismatched plates and fresh-brewed coffee.

When the gold rush hit the Black Hills, people started arriving from every direction. Stage stops popped up around the region so travelers could get fresh horses, supplies, and the latest information on safe passage through the hills. Conditions would vary due to weather or skirmishes between travelers and bandits along popular routes. Cheyenne Crossing — originally known as the Ice Box Canyon Valley Station — was one of the eleven stage stops between Cheyenne, Wyoming, and Deadwood. It served as a stage stop from 1878 until 1883 when railroads arrived and reduced the need for traveling by wagon.

The history of Cheyenne Crossing isn’t well-known between 1883 and the late 1930s. It survived the interim years by continuing to provide services to travelers through the area as a general store. Rumor has it there was also a kitchen serving fried chicken that was well worth the journey into the canyon.

In the early 1940s, the Bell family discontinued the kitchen, but ran a grocery store and a livery for anglers and loggers that passed through. At the time there were wells drilled into the floor of the building that used the cold flow of the nearby creek to keep items like pop, milk, and beer cold. In 1954 they constructed the current building at Cheyenne Crossing, just across the street from the original stage stop. Unfortunately, the first building was lost in a fire in 1959, but the new building carries on in its name.

Today, Cheyenne Crossing is home to a gift shop, a bed-and-breakfast, and the Stage Stop Cafe. Current owner Dave Brueckner previously lived and worked in the restaurant industry throughout Metropolitan Detroit before retiring to the Black Hills in the early 2000s. He’s owned and operated Cheyenne Crossing since 2005. While he’s made some changes to the building — he’s expanded the space four times since taking ownership — he’s stayed true to the place’s roots. “We wanted it to feel like you’re headed out to a cabin in the woods. From the knotty pine and plaid and the decor — we even purposely keep the dishes mismatched to give you that feel of the family cabin out in the woods,” Dave says.

The decor isn’t the only thing that imbues a family atmosphere. Every person who works at Cheyenne Crossing goes above and beyond for customers. “We empower our staff to make things right. If there’s something wrong, let us know, we’ll make sure your experience is what you expect it to be,” Dave says.

The attention paid to the food at Cheyenne Crossing makes it feel as if you’re home for a special occasion and mom or dad pulled out all the stops to celebrate. They make everything from scratch daily, and you won’t find produce from a can or meat out of the freezer. The only ingredient they use that isn’t fresh is their 35-year-old sourdough starter; but at the rate they sell sourdough pancakes at breakfast, clearly the exception is a good one. Indian Tacos are a crowd-pleaser, and the carrot cake is a delight you simply can’t miss, even if you have to take it to-go. The menu is hearty and delicious, but also stays in touch with Cheyenne Crossing’s roots. “At one point they served travelers here just side pork and hardtack, which are nasty biscuits,” Dave chuckles. “We still keep side pork on the menu, but our biscuits are much improved — and fluffy.”

After your meal, the gift shop is worth a gander for souvenirs, creative gifts, or simply candy to satisfy your sweet tooth down the road (that is, if you missed out on the carrot cake). Keep an eye out for books on Black Hills history, locally made gifts such as jewelry and jams, and Dave’s famous Heifer Dust seasoning. While the exact recipe is a family secret, Dave promises you won’t run out of uses for it when you buy a jar. “We use it on almost everything in the restaurant. It’s not great on pancakes or desserts, I wouldn’t try it there, but otherwise it’s great on anything,” Dave says.

Cheyenne Crossing has come a long way since its beginnings. While it still serves as a place for travelers to stop in, learn about the hills, and grab a bite to eat, it’s more than just a quick stop. “People don’t need another place to eat, they need an experience,” Dave says. “Our Indian Tacos are legendary, but so is our hospitality and our service. A zebra in a herd of horses stands out — and that’s what we want to do here.”