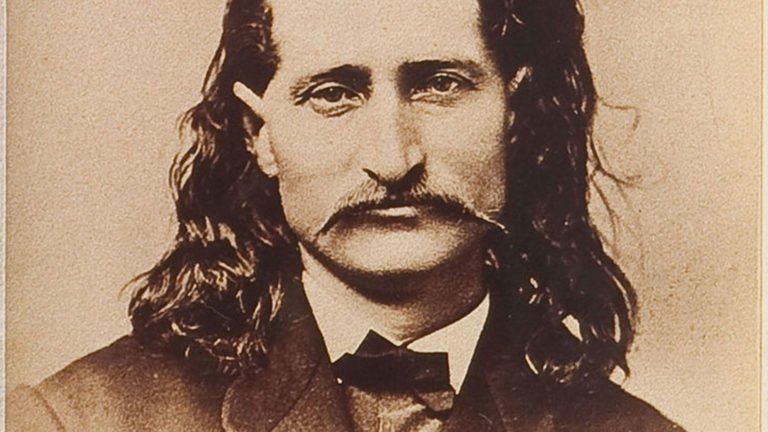 On August 2, 1876, Wild Bill was playing a game of poker at his usual table in the corner near the door at the Saloon No. 10.

During the game, Jack McCall entered the bar. Remaining quiet, McCall slowly walked around to the corner of the saloon where Hickok was playing. Under his coat, McCall’s hand was on his double-action pistol, a .45. He came up slowly behind Hickok, attempting to create the impression that he was a casual observer of the game, and in this attempt watched several hands being played. Everyone’s attention was focused on the player opposite Hickok, as that man placed his bet, McCall withdrew his revolver and shot Wild Bill Hickok in the back of the head, killing him instantly.

Wild Bill held a pair of eights, and a pair of Aces, which has since been known as a “dead man’s hand.”

McCall testified that Hickok had killed his brother back in Kansas. This was a possibility, considering that Lew McCall was a thief, and had met his end in Abilene in a gunfight with a “lawman.” It was also said that McCall may have been paid to kill Hickok, a claim that has never been substantiated. McCall was set free in Deadwood, but was later tried for the murder in Yankton, Dakota Territory, where he was found guilty and hanged.

Sources:
“Gold-Gals-Guns-Guts” by the Deadwood/Lead Centennial Committee.
“The Black Hills and Their Incredible Characters” by Robert Casey.