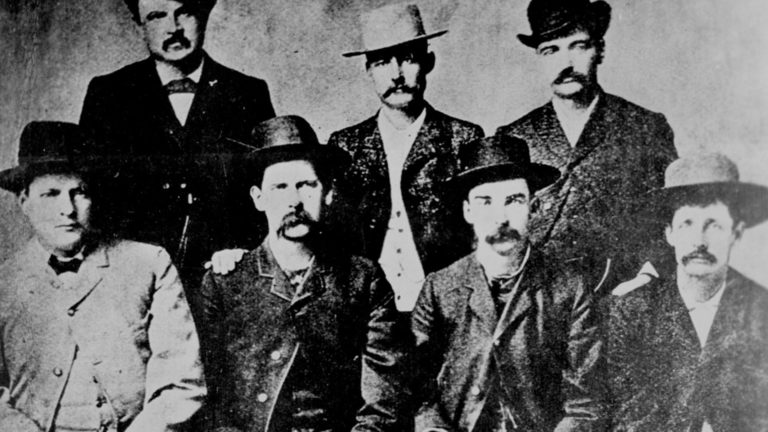 Wyatt Earp has been popularized as the fearless frontier lawman of the Kansas cow towns, and as the main character in the incident known simply as “the Gunfight at the OK Corral.” But the checkered Earp legend also cast a portion of its shadow on the Black Hills.

Wyatt Berry Stapp Earp was born in Monmouth, Illinois on March 19, 1848. The family moved to Pella, Iowa, in 1849, and on to Colton, California, in 1864 where he was later employed as a teamster and railroad worker. He was quite loyal to his large family, including brothers Virgil, Morgan, and James. Wyatt Earp returned to Missouri and married in 1870, but after the sudden death of his new bride Urilla, he drifted the High Plains working as a buffalo hunter, railroad laborer, and stagecoach driver. It was during this period that Wyatt befriended a young Bat Masterson.

He arrived in Wichita, Kansas, in 1875 where he joined the police force. In 1876, he moved to Dodge City, Kansas, where he took a job as a faro dealer as well as assuming the position of assistant marshal. During this period Wyatt established his reputation as a lawman and proficient gambler. It was also here he met his longtime ally John “Doc” Holliday. Bat came to town and was hired as one of Wyatt’s deputies. Masterson once characterized Wyatt as “a shy young man who did not drink liquor, and was more intelligent, better educated and far better mannered than the majority of his associates.” Masterson quit the force in the summer of 1876 and headed north to a gulch named Deadwood in search of his fortune.

According to Stewart Lake’s biography of Earp, the one constant in Wyatt’s life was wanderlust, trying new things, and the pursuit of wealth. The gold strike in the Black Hills of Dakota became too much of a temptation for him to pass up.

So, Wyatt and Morgan left Dodge City for Deadwood on September 9, 1876, in a wagon drawn by the best four-horse hitch money could buy, heading for new opportunities in the booming Black Hills.

At Sidney, Nebraska, they met up with Bat returning south to Dodge City. Masterson warned the Earps that Deadwood was overcrowded with prospectors. “I’ve started for Deadwood and I’m going in,” insisted Wyatt. “I may strike something the rest have overlooked.”

Pointing their horses northward, Wyatt and Morgan headed for the hills. The brothers arrived in Deadwood to find the situation exactly as described by Masterson; Deadwood gulch was jammed with prospectors, miners, promoters and fortune hunters. After looking over the situation, Morgan decided to return to Dodge City before winter closed in. Wyatt was convinced that a sober man could prospect for gold dust at the gaming tables of Deadwood saloons. It also been reported (one account from Seth Bullock’s son) that the Earps had been recruited as “muscle” by some party in Deadwood to help with mining claims, and didn’t just show up looking for color.

The man from whom I rented a stable had filed on a timbered hillside a few miles from town where he had been cutting and piling wood during the fall, expecting to sell it when winter set in. But, like the rest of the camp, he had forgotten all about transportation. I had a hunch that a fuel shortage was coming, so I tied up that wood supply with a contract to pay the owner two dollars a cord, at his property. As it was mostly deadfall, he made a fine profit. I rigged a wagon box for use on wheels or runners that would carry two cords to the load, and hired a man to help me load and throw off at two dollars a trip. Buyers did their own piling.

I could haul four loads a day, sometimes five, which meant eight or ten cords daily. I sold it in Deadwood at twelve dollars a cord, cash in hand before unloading. Every haul was contracted for in advance, and many a time I have driven down the main street of the camp with men running alongside bidding twenty, thirty and even fifty dollars a cord for what I was obligated to sell at my regular price to someone to whom I had promised delivery. For special night hauls I charged stiff premiums. Once a man routed me out of my blankets for wood to keep a big poker game going until morning. He paid one hundred dollars a cord and ten dollars for my helper – the thermometer was at forty below zero that night and there was a forty-mile northwest wind howling.

I didn’t gamble much that winter. I delivered wood seven days a week and when night came I wanted to sleep. But I was young and tough, so were my horses, and we came through to spring in fine shape physically, with a profit of about five thousand dollars.

Wyatt explored the hills the following spring, and confirmed that all likely looking gold claims were already staked. It is rumored that the reason Wyatt Earp left was that he and Deadwood’s sheriff Seth Bullock did not see eye to eye on an issue. He sold his team and went to the stage office to reserve a seat on the Cheyenne stage in the spring of 1877. Wells-Fargo Agent Gray, who saw Wyatt’s departure as an answer to his problem of safely shipping out the spring cleanup of the gold mines, posted a bulletin on the Wells-Fargo office door:

The Spring Clean-up will leave for Cheyenne on the Regular Stage at 7:00 a.m. next Monday. Wyatt Earp, of Dodge, will ride shotgun.

The shipment of more than $200,000 worth of gold rolled out of Deadwood with Wyatt in the boot. “I was a traveling arsenal that morning,” Wyatt recalled. “We reached Cheyenne about four o’clock Wednesday afternoon with every ounce of dust intact. We had changed drivers during the three-hundred mile trip, but I was on duty every minute.” Wells-Fargo picked up his fare and paid him $50 for his services. Wyatt Earp seemed to be back at work in the law enforcement business.

Wyatt Earp returns to the law

Earp later recalled that gunmen in Deadwood were as proficient as in any Western community, except possibly Tombstone. He described watching the outcome of an argument that started in the Montana Saloon between Turkey Creek Jack Johnson and two partners. In a two-against-one duel, Turkey Creek faced them off, standing in the road that ran beside the cemetery at the edge of camp. Johnson killed both men and suffered only minor flesh wounds. But Wyatt left his highest praise for his old acquaintance Bill Hickok.

“Bill Hickok was regarded as the deadliest pistol-shot alive, as well as a man of great courage,” Earp said. “There was no man in the Kansas City group who was Wild Bill’s equal with a six-gun.”

Earp returned to his old job as city marshal of Dodge City. Three years later he hired on as a deputy sheriff of Pima County, Arizona. He was later appointed United States Marshal for the Tombstone district of Arizona, and was sometimes assisted by brothers Virgil, Morgan and James. The lawman’s most famous moment occurred at the famed O.K. Corral gunfight. Doc Holliday, Morgan, and Virgil sustained superficial wounds during the famous Tombstone event, while Wyatt walked away without a scratch from the Clanton gang’s firearms.

Controversy and speculation about the activities of Wyatt Earp and his brothers in this event prompted them to leave Tombstone. Earp went on to successful ventures in Idaho, Alaska, Nevada, and California in the following years.

After a life of adventure, Wyatt Earp died at his Los Angeles, California home on January 13, 1929. He was survived by his third wife, Josephine (Josie) Marcus Earp. Cowboy actors Tom Mix and William S. Hart were among his pallbearers. Wyatt’s ashes were buried in Josie’s family plot in Colma, California, just south of San Francisco.