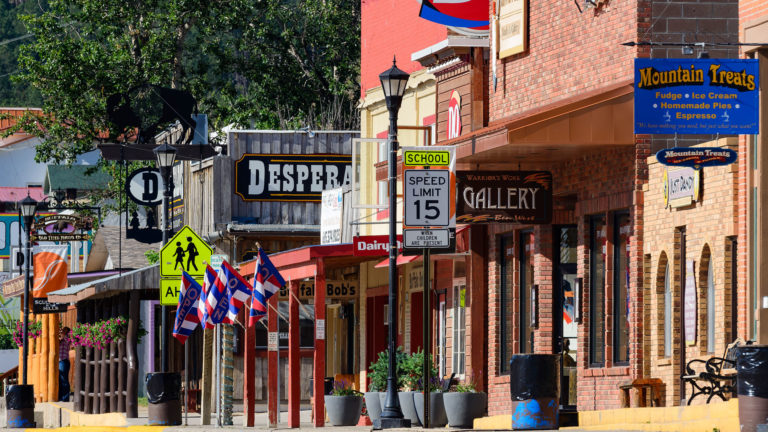 The Story of Hill City

Hill City is the oldest community in Pennington County and the second-oldest in the Black Hills, founded in 1876 shortly after Custer. The discovery of gold in nearby French Creek 13 miles to the south prompted homesteaders to form a settlement in a scenic valley beside Spring Creek. Its centralized location earned it the nickname “The Heart of the Hills,” a moniker still popular today. Following the discovery of richer strikes of gold in Deadwood later in 1876, most of its residents fled for the northern Hills, turning Hill City into a virtual ghost town practically overnight.

The town managed to avoid becoming a footnote in history when tin was discovered in the surrounding hills in 1883, sparking a new industry and giving rise to an influx of residents. Investors from England formed the Harney Peak Tin Mining, Milling, and Manufacturing Company, buying up some 1,100 tin mining claims. Hill City enjoyed a new boom period; 15 saloons sprang up to quench the thirsts of the thousands of new miners, whose rowdy shenanigans led one observer to describe the community as “a town with a church on each end and a mile of Hell in between.” The Harney Peak Hotel balanced things out, providing a luxurious getaway for businessmen visiting from out of town. The building still stands in its original location and is the current home of the Alpine Inn; it appears on the List of Registered Historic Places in South Dakota.

In 1893, the Chicago, Burlington and Quincy Railroad reached Hill City, and a spur called the Black Hills Central Line was extended from Hill City to Keystone. In 1957, the Black Hills Central Railroad began operating a tourist passenger train known as the 1880 Train, which has since become one of the town’s biggest attractions. Another track called the Black Hills High Line offered narrow-gauge passenger service from Edgemont in the southern Hills through Hill City to Deadwood; this was discontinued in 1949, and the rail line was abandoned in 1983. Today is the site of the popular George S. Mickelson Trail.

Hill City’s fortunes waned once more when tin production did not meet expectations. Investors withdrew their money from the venture, and the majority of miners left again. The railroad became the dominant industry in town during the first half of the 20th century. Controversy erupted in 1992 when the FBI seized “Sue,” the most complete Tyrannosaurus Rex skeleton ever found, from the Black Hills Institute of Geological Research in Hill City. Named after Sue Hendrickson, the paleontologist who discovered the fossil two years earlier, the skeleton was the subject of a legal ownership dispute involving the land owner where the bones were found; the Lakota Sioux; and the federal government. After a lengthy court battle Maurice Williams, the landowner, prevailed; Sue was eventually auctioned off and sold to the Field Museum of Natural History in Chicago, where she is currently on display.

Today, downtown Hill City features a variety of shopping, museums, galleries, and attractions, and has become known for its thriving arts scene, as well as a haven for outdoor enthusiasts eager to explore the abundant recreational opportunities throughout the Black Hills.

For more information on attractions and events in Hill City, visit us here.